Last Summer my dear friend took a dream trip to London to see Benedict Cumberbatch play Hamlet, among other exciting touristy things in the area.
Her dear friend and travel partner was excited to see a friend from University who has made a name for herself in the book world with her Cat Adventure series the Warriors Books.
Yes, they had tea with Erin Hunter herself.
The Eldest just happens to be a HUGE Warriors fan, and my friend took along her good wishes.
Erin Hunter graciously offered to send The Eldest a signed copy of her favorite book and it came today! 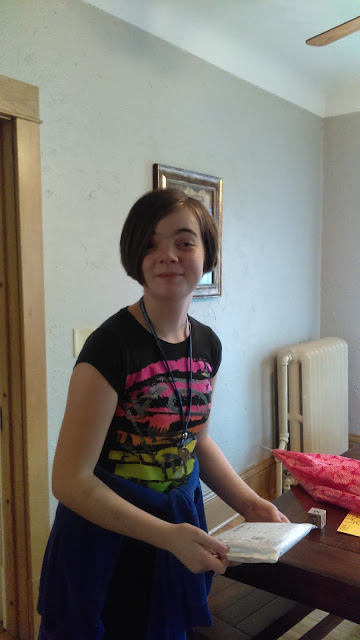 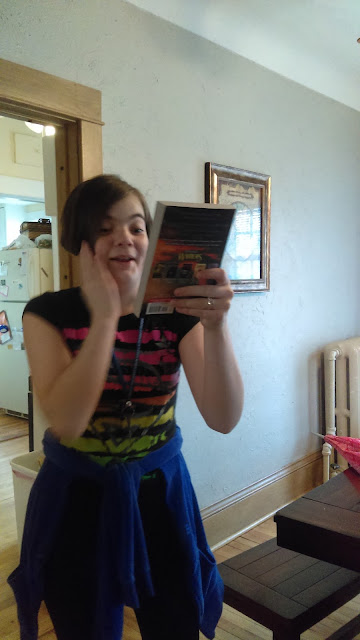 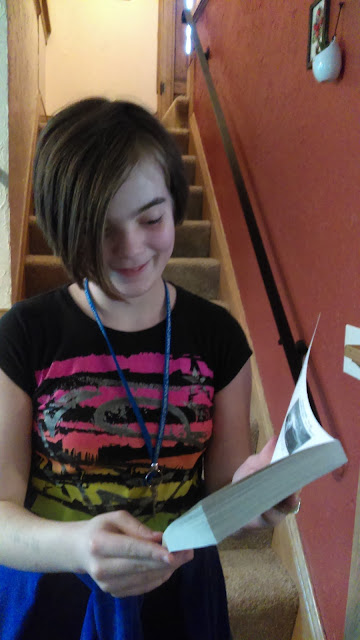 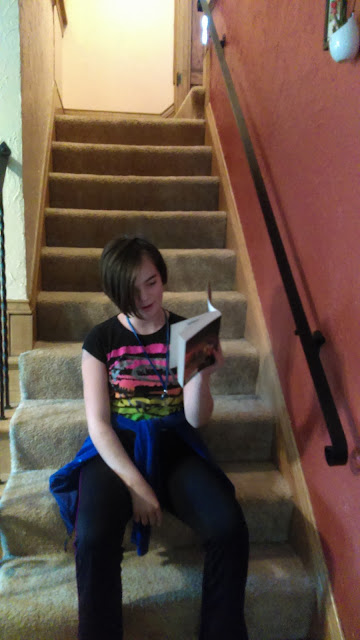 She ran upstairs with it a couple of hours ago, and I don't anticipate seeing her again.
Thanks so much to Erin Hunter! This is one elated lady.

The Evolution of an Acorn

A few years ago another mom and I were bemoaning the fact that the school didn't put on a play (in fact there had been a play in the past, and it was a reason that both of us had chosen the school for our kids) so we decided to start one ourselves.
The first year we chose a number of Aesop's Fables and the kids wrote their own skits. Last year we got permission from Mo Willems to use his books and we put on 11 vignettes which were basically Gerald and Piggie books acted out. (Mo Willems writes such brilliant dialog, we didn't need to change a thing)
This year my friend and I tackled the story and script on our own.
It's a variation on a number of fairy tales mainly focused on The Three Pigs.
We were planning on 15-18 kids participating and we got 30 which was so exciting, but it meant that we had to expand the script. We decided to add some frolicsome squirrels to help with scenery changes and if you have squirrels you need acorns. 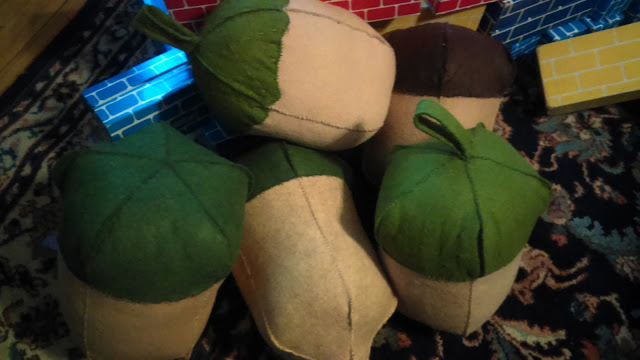 The plan is to choreograph a dance with these giant acorns. So I made one up. The pattern I devised made less of an acorn and more of a peanut. I also dedicated too much effort into details that wouldn't read from the stage. 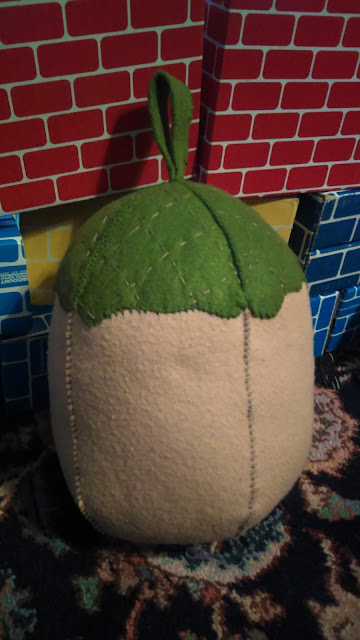 So, I amended the cap, and extended the bottom. It was still a little round for my liking. Also after a dry run with the kids the handle pulled too much on the seams so that had to go. 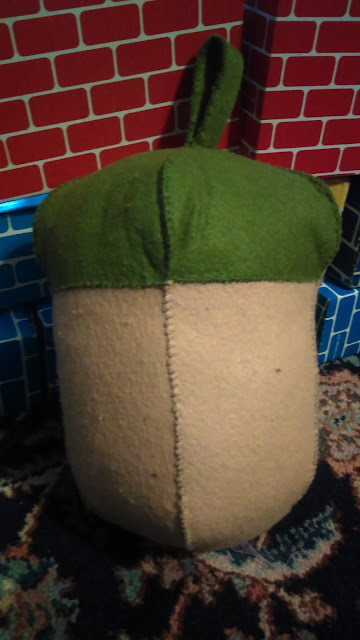 The next few acorns came out a little better; pointer nut, no handle, fun to toss and catch. 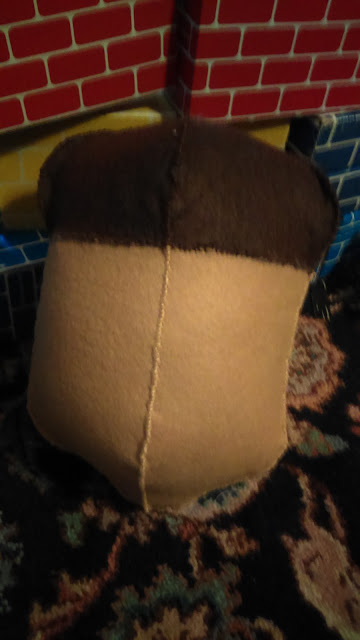 We haven't finished the choreography yet, so I don't know exactly how many we need, though I think I'll make up at least one more for an even half-dozen.
What's sparking your creative fire today?
Joining Nicole for KCCO.
Posted by Jess at 7:51 AM 1 comment:

A very happy birthday to my smart, funny, fearless, happy, beautiful girl
Posted by Jess at 9:59 AM 3 comments:

I have been staring at this basket of yarn for a few days now, trying to figure out what to make. 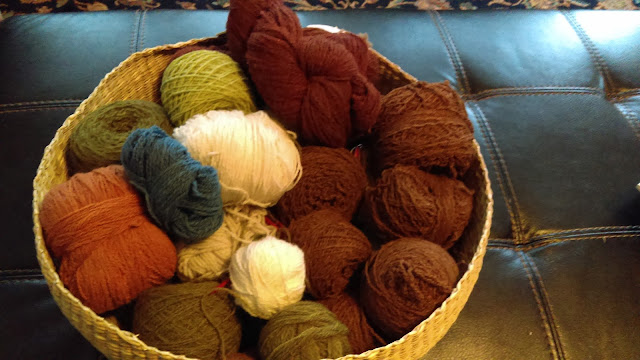 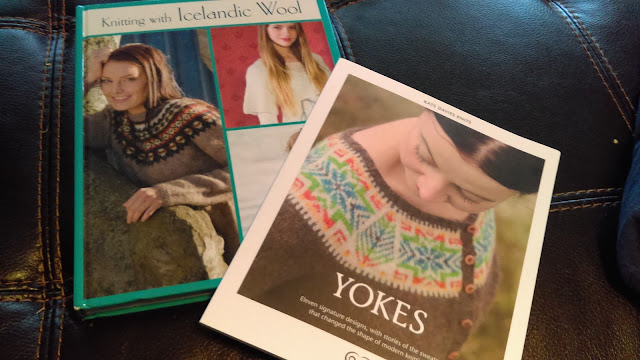 I wanted to do some sort of yoke sweater, and the colors just weren't calling to me. Then I realized that the cover sweater of Kate Davies' book was perfect for the yarn at hand. 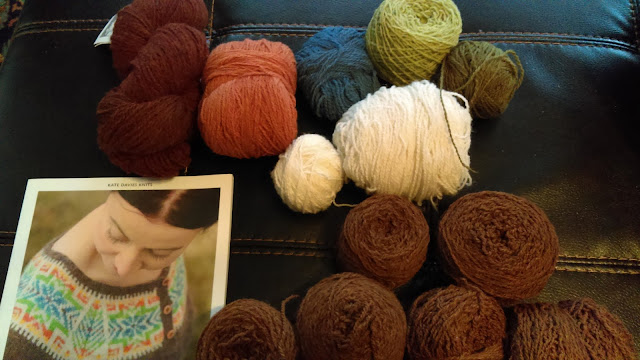 So, now I swatch and see if I like it.