After the whirlwind of the last two weeks of working, and then some truly atrocious weather, we haven't had much unstructured time outside lately. Today the dewpoint was so much lower, and there was even a little breeze, so we headed to the playground for some much-needed vitamin d and just being outside.
There was monkey barring, swinging, knitting, reading, running, and giggling. 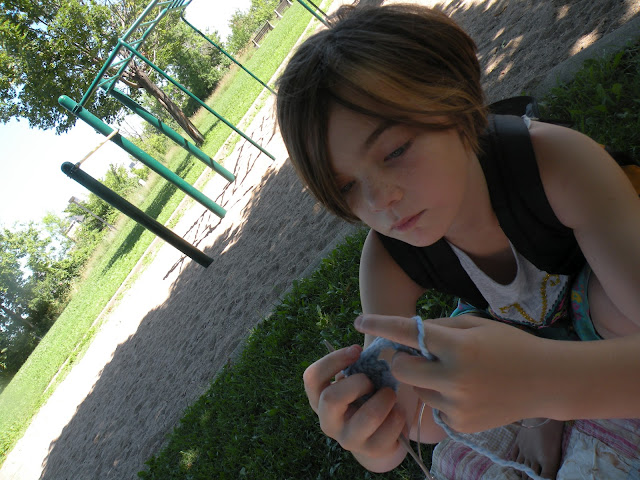 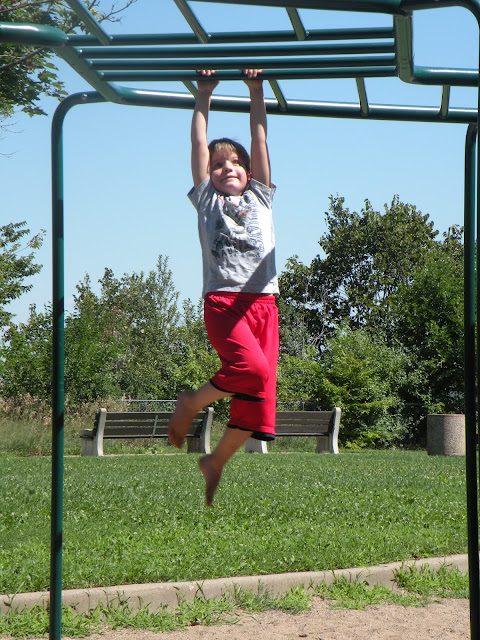 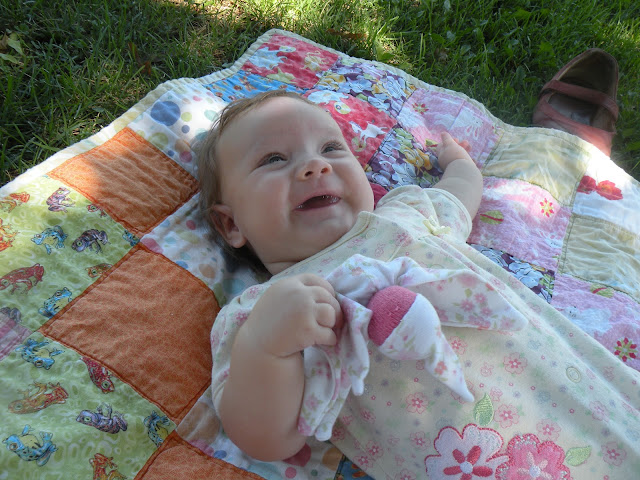 Follow that up with a delicious lunch, some time in the wading pool (which is looking comically small with these two in it) 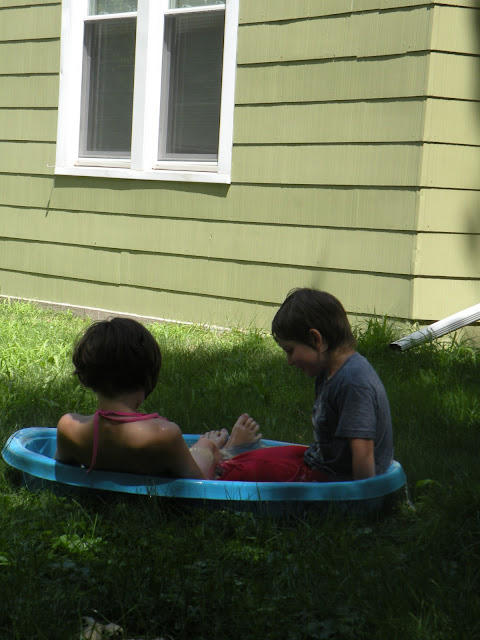 And it turned out to be the perfect day.
Posted by Jess at 11:33 PM No comments:

Joining Ginny, though I think I may be cheating a little...
I haven't been doing that much knitting, but I did do a little hand-sewing tonight.
The Youngest is growing like a little smiley, chubby weed, and she has grown out of a bunch of her clothes.
I was a little sad when she grew out of her latest sleeper, so I decided to convert it into a little dolly so we could hang on to it.
This little star baby is inspired by a pattern in Nature Babies.
I like to use baby socks for doll heads.
They come in great colors, and I always seem to have a big pile of single socks when I finish folding the laundry. 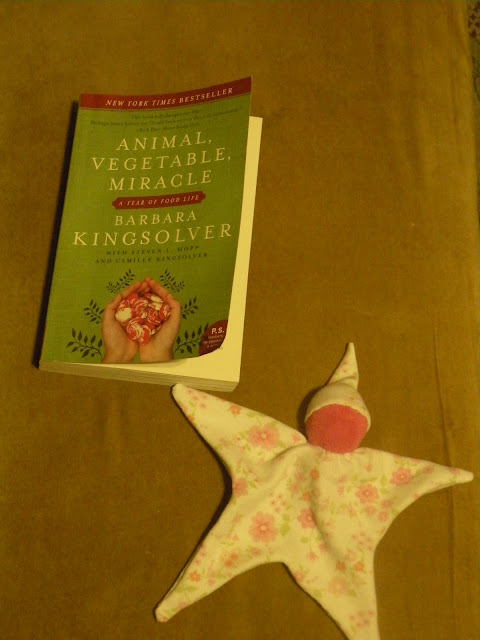 I started reading a new book this week too.
My parents gave me Animal, Vegetable, Miracle for my birthday.
It's a great read so far.
What's on your needles tonight? 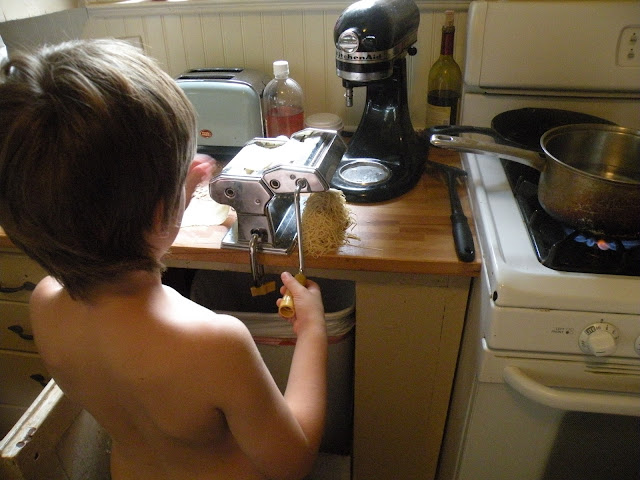 With some help from my sous chef home made noodles made it on the menu for lunch today. 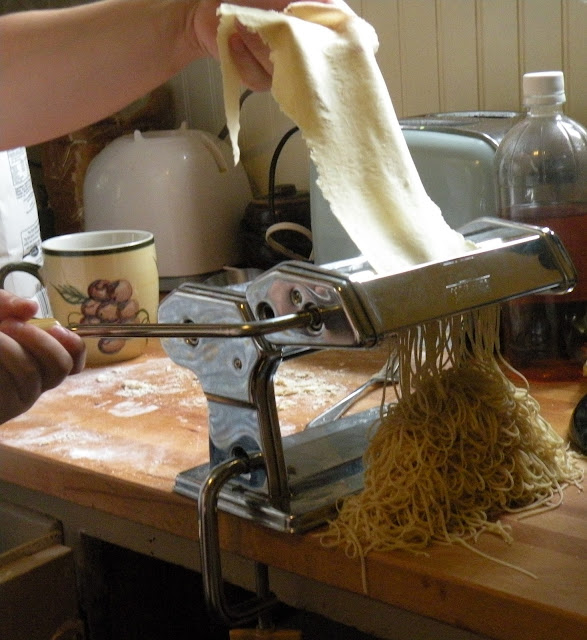 Pour the flour onto your counter making a well in the center.
Break the egg into  the well and using a fork mix the flour and egg together.
Sprinkle water over dough and knead into a dough for about 30 seconds.
Let dough rest on the counter for a few minutes.
Knead the dough a second time and run through pasta maker.

When I use my machine I start with the largest setting and run the dough through, then fold in half and run it through again.
This dough is pretty shaggy and sending it through the pasta maker smooths it out.
After it has gone through at the widest setting a few times, send it through at narrower settings a click or two at  time until it's thin enough to run through the cutting rollers.

These noodles cook really fast. It only took about 2 or 3 minutes to boil them. 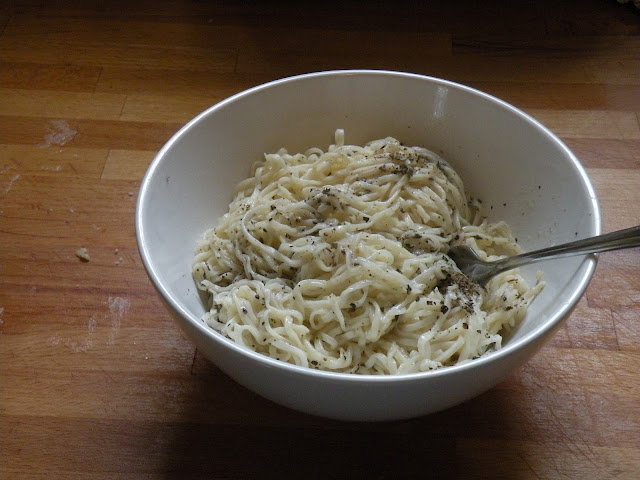 They were delicious.
Posted by Jess at 1:23 PM 1 comment:

Keep Calm and Craft On

It's time to Keep Calm and Craft On again, and I just realized that I haven't posted at all this week!
I have mentioned before that I work at a local yarn store, and this past week I taught my annual childrens' fiber camp.
We dyed yarn with Kool-Aid, knitted, crocheted and needle felted.
It was lots of fun, though a little hot for wooly endeavors.
I made this little wall hanging as a sample for the kids, to show how easy and fun it is to needle felt. 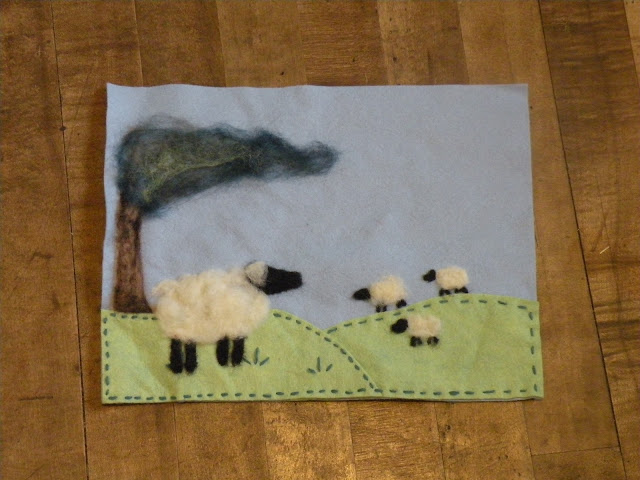 As I was demonstrating I remembered how easy and fun it is for myself! I bought this book, and I am inspired to try making some little needle-felted friends for the kids. 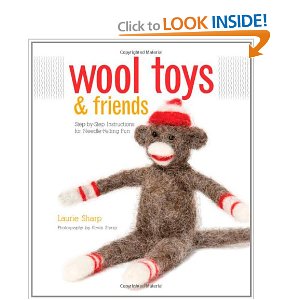 In my quiet evening moments this week I was also able to do a little spinning on my new wheel. 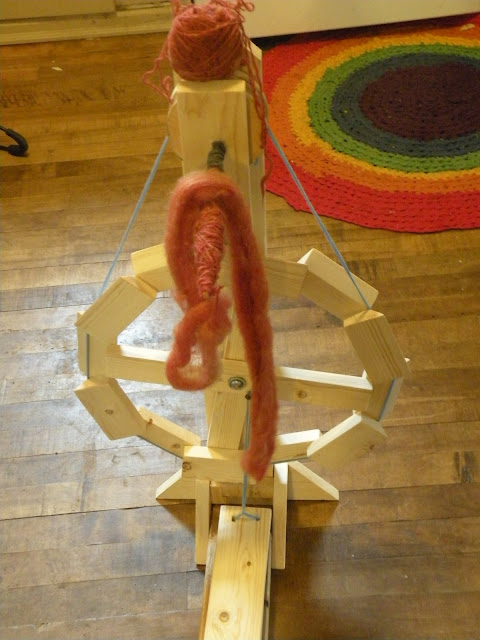 It's not perfect, by any means, but it is making yarn! I wound off my first ounce or so of single spun, and I am working on some more to ply with it.
I had a few hiccups getting the wheel to run smoothly, mostly from my own neglect in following the directions, but it mostly does what its supposed to do now.

I have a few fun things to try out today with the kids (one of whom is feeling low with a cold) so I may post later on to share that. 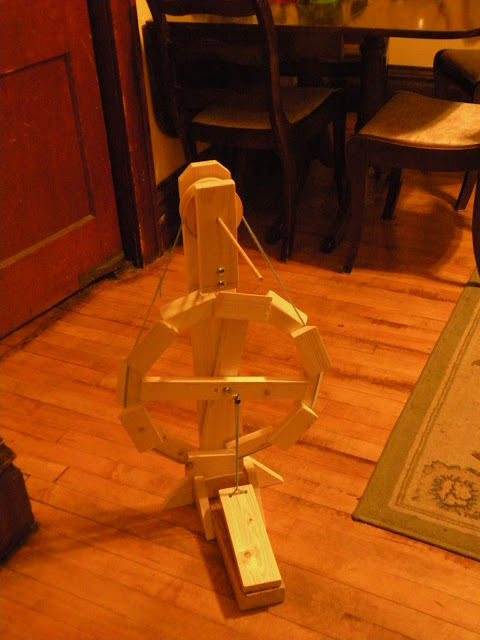 The Elder and I worked on this for a couple of hours yesterday, and today it's finished.
Now to learn to spin ;)
Joining in with Keep Calm and Craft On.
Posted by Jess at 11:35 PM 5 comments: 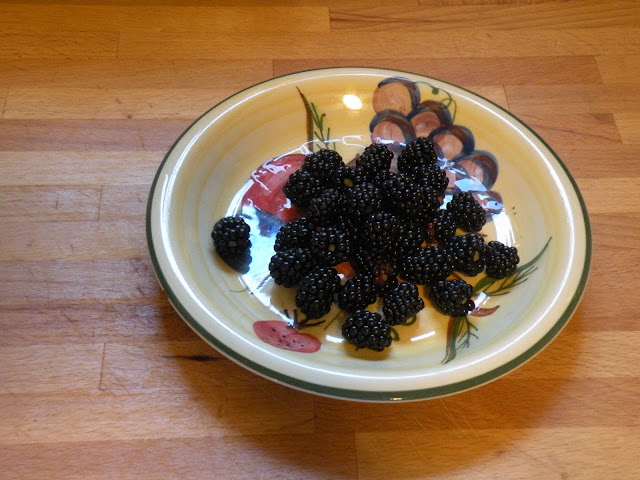 I just finished my 7th consecutive day working, which is a lot for me, since I have been used to spending every day of the week home with the Elder, Younger and Youngest.
This week I taught a sewing camp at Treadle.
The girls in my class were completely delightful.
There were 6 of them and they worked their fingers to the bone finishing backpacks, pillowcases, needle books and log cabin quilts!
The quilts were a little bit of a stretch for the time that we had, and I had intended that most of the class would have to do a fair amount of finishing at home.
As it turned out, 5 of the girls completely finished, and the last one was well on her way.
I wish I had thought to bring my camera along, because their quilts were all beautiful and so different!
Tomorrow I have most of the day off, which I think will make the Youngest happy.
She has been out of sorts since I started antibiotics, and then when you add visiting my parents' house and my dear neighbor's while I was working you get a pretty cranky little lady.
Next week holds much of the same for the kiddos, though they'll get to stay home most days and have a babysitter, because I am teaching another camp at The Yarnery.
Hopefully the weather won't be quite as hot as the predictions that I have heard, since we'll be doing a lot of projects with wool.
I am having an unexpectedly quiet afternoon right now, the bigger kids are at a friend's house, the Youngest is sleeping and my piano students canceled. Time for a little guilty pleasure t.v. and some sewing on a work project.
What's on your agenda for the rest of the day?

Building and Yarn Along

Hello Yarn-Along-ers and Craft-On-ers,
I haven't done too much knitting this week, I have been too excited about the prospect of building my own Spinning Wheel!
This spinning wheel has been on my radar for a long time, years maybe, and I spent last summer picking up pieces that I thought would work to assemble my own. I may someday still go ahead with that plan, I love the look of a Charka and it would be pretty portable.
However, since I saw the $7.00 Spinning Wheel last week I decided to have a go at that one.
On Sunday we went to the hardware store and bought wood and a bunch of little metal pieces, and a fun new tool. Once we got home, I did a bunch of cuts with my miter saw to get the pieces that I will need.
This afternoon I spent some time on the front lawn with the Elder and the Younger, the Youngest was taking a lovely nap, and we sanded the rough edges on the many little pieces needed for the spinning wheel. 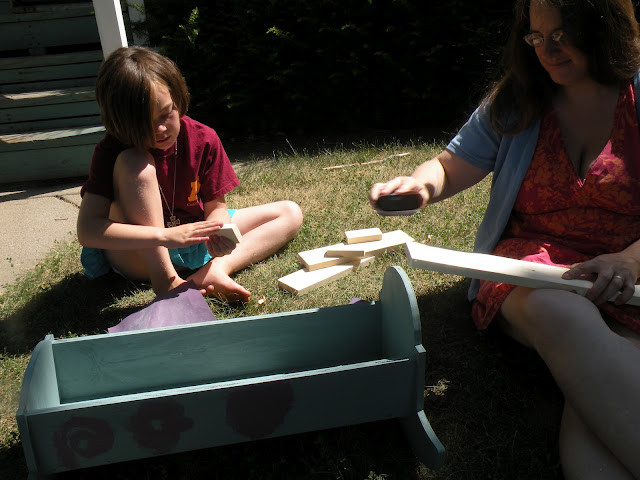 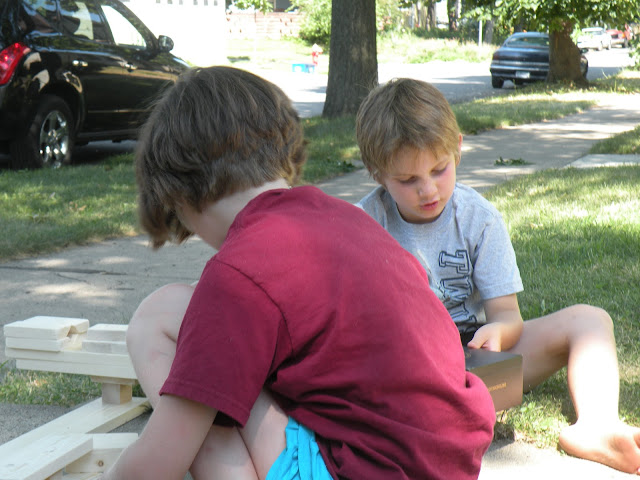 After a little bit of sanding, the kids decided that it would be more fun to just build castles with the pieces, and we added a few other things, like some empty cigar boxes. 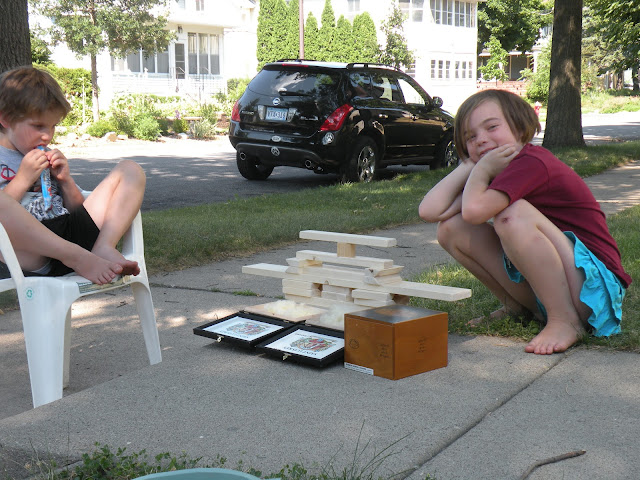 (The Younger thought this one looked like a robot.) 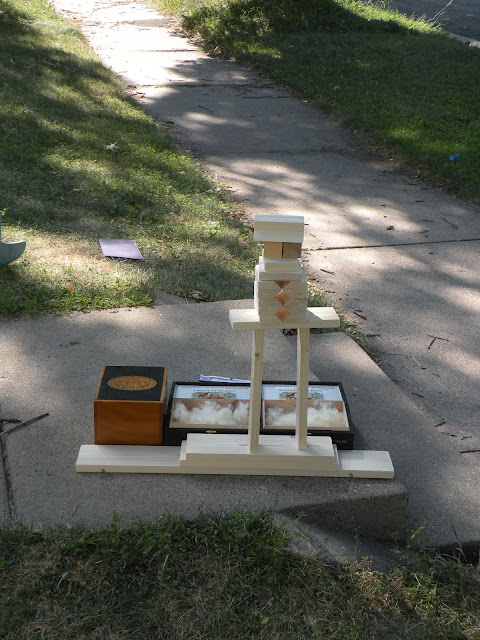 (This is the Elder's attempt at the tallest castle she could build. I love the negative space diamonds.)

Super fun, and now we're one step closer to having a spinning wheel! A little regular work to do first, but hopefully this week we can begin assembly.
Happy Yarn Along and Keep Calm Craft On swept me up today too!
What's on your creative plate today?
Posted by Jess at 10:55 PM 12 comments: 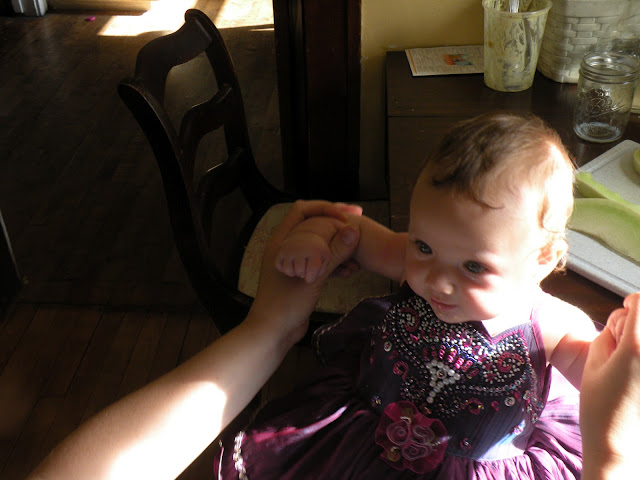 Joining Amanda today
{this moment} - A Friday ritual. A single photo - no words - capturing a moment from the week. A simple, special, extraordinary moment. A moment I want to pause, savor and remember.
Posted by Jess at 7:46 AM 5 comments:

I had a pretty lackluster to crappy birthday on Monday.
The night before I stayed up later than normal trying to stave off my third occurrence of mastitis since the Youngest was born.
Hot compresses, ibuprofen, pumping, all to no avail, I was still pretty sick in the morning.
I went to the doctor and he was concerned that since it was indeed my third time that perhaps there was an underlying cause that hadn't been previously identified.
Now you never really want to hear the words inflammatory malignancy, but on your birthday they're especially unwelcome.
We had planned to see Brave with the kids in the afternoon, and then head out for dinner, and I hoped to pick up a birthday cake from BitterSweet, which is an allergen sensitive bakery close by.
So, as we were deciding our afternoon plans, I went to check the holiday hours at BitterSweet and they were closed for the entire week.
No birthday cake, possible cancer and I'm back on antibiotics which cause tummy troubles for The Youngest.
On the bright side, the movie was excellent and we had a nice dinner out, notwithstanding the milkshake kerfuffle that the Younger endured (his first caramel milkshake came in a leaky cup, the second one was a salted caramel, not to his taste at all, and the third fell on the floor.)

Tuesday brought better news - the breast ultrasound was clear, and the radiologist seemed annoyed that the doctor had even brought up cancer, since I wasn't presenting with most of the symptoms.
Also, I baked my own cake - dairy-free and lemon curd-filled.
Yesterday we celebrated three birthdays at my in-laws, since my Father-in-law and Mother-in-law both have birthdays this week too, and had a lovely time.
Then I got home and as I was cruising Ravelry I saw this - 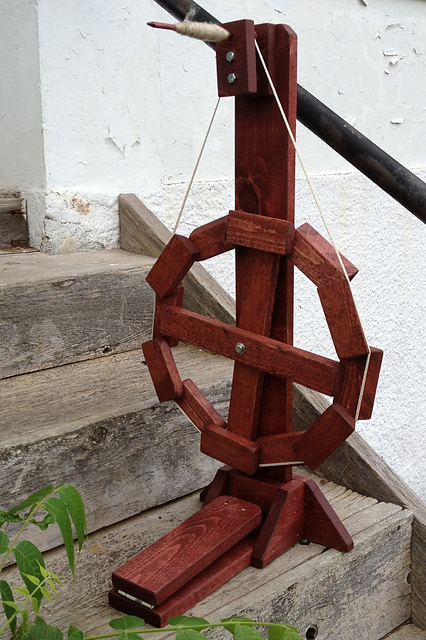 Bishopofknit's $7.00 spinning wheel
Dude. The universe is sending me a sign and an apology for my sucky birthday.

I'm off to the Home Depot for a 1" x 4" today and hopefully I'll have a spinning wheel by the end of the month! 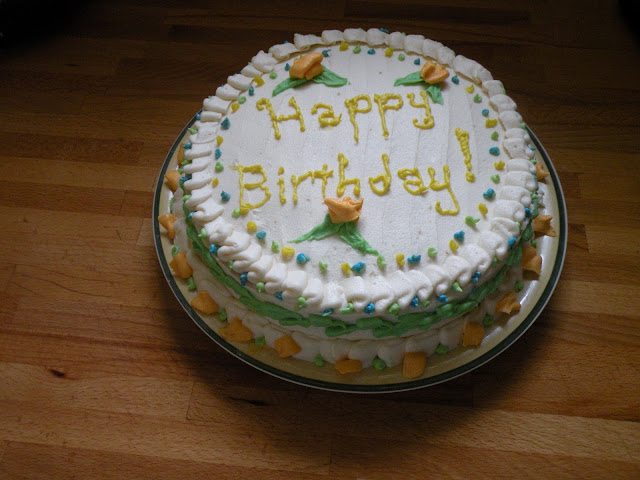 Yarn Along (completely inappropriate to the weather edition) 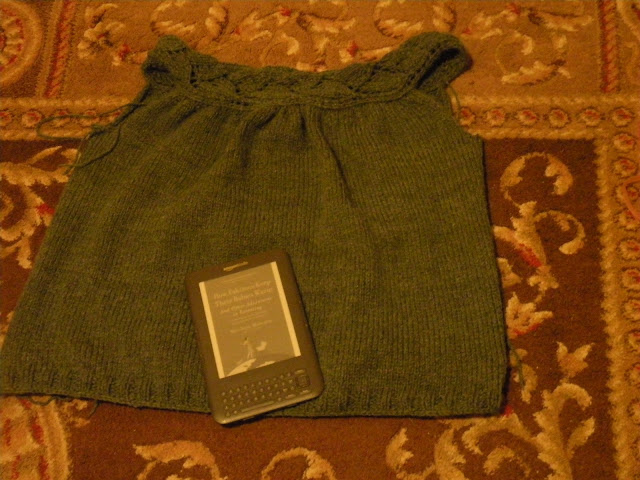 Yarning  Along with Ginny.
I finished the body of my Ariana Shell tonight, and now all that's left is a little ribbing at the armholes and the neckline.
The weather, as I mentioned in the title, is not at all conducive to trying on or modeling a wool sweater, sleeveless though it is, today's high was 98 or so and they predict 105 degrees tomorrow. It felt a little silly to be working on it in this weather, but I was teaching a class this evening and I always like to bring along my knitting so I can demonstrate techniques.

I am still reading How Eskimos Keep Their Babies Warm, and it's still really interesting.
I don't know if I love the writing, unfortunately.
The author refers to her husband babysitting her daughter, as though it's not just that he's parenting just like her...
She also refers to some practices of folks around the world as amusing, which doesn't seem the most objective adjective to use.
Picky things, I'm enjoying the information so much that I am trying to ignore these little things, but they creep up on me and annoy.
What are you reading today?
I think it'll be time for a new book for me soon.