Finished (with one at least)

I finished the Helleborus Yoke sweater yesterday.
Overall, I am happy with it.
I don't think I can wear it without a shirt underneath as I have chubby elbows, but that will work out fine for the remainder of the winter. 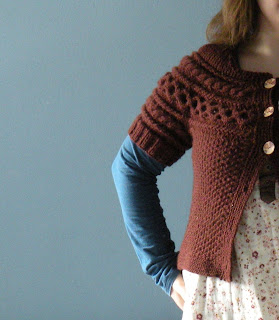 Now to go fold all the laundry that I neglected whilst knitting this little baby...
Posted by Jess at 4:21 PM 6 comments:

I have been unusually crafty these past 4-6 days, and it just occurred to me that it might be from a lack of running around outside.
Over the weekend there was a huge influx of pictures on my friends' flickr pages of food and bread and more bread and a little more bread, so I was inspired to pull out my copy of Artisan Bread in 5 Minutes a Day and get baking.
I put up the dough last night, and this morning I made fresh pita for the kids breakfast.
They weren't too impressed, frankly, but I felt like Laura Ingalls, so that was fine with me.
They were, however, all eaten before I had a chance to take a photo.

Next I decided to whip up something that would go with dinner. 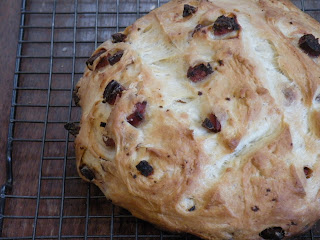 Unfortunately that is almost gone as well.
This is the Prosciutto and Olive Oil Bread, but I didn't have prosciutto so I used breakfast sausage.
Still quite yummy.
I have high hopes of cinnamon rolls for breakfast some day this week, so stay tuned.
Posted by Jess at 11:03 AM 3 comments:

I finished the Wyvern pattern in my sweater, 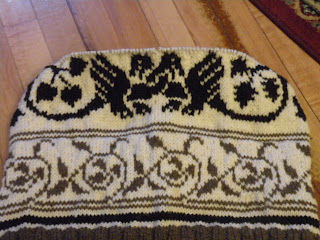 now I just have to decide what kind of pattern the rest of the sweater will have.
I don't know why I procrastinated so long, the pattern actually worked up easily in a day (with lots of tv and sonic the hedgehog..ahem)
I have also made progress on the Helleborus Yoke sweater 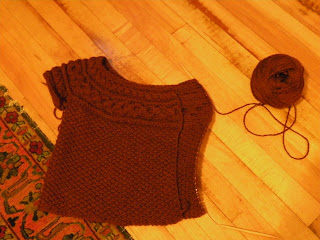 the back is a little over half done.
When this portion is finished, after the back, other sleeve and front are knitted, I'll pick up around the neck and make a collar, and around the sleeves to make a cuff, and I hope I'll add some length on the bottom, I haven't read that far ahead yet...
Posted by Jess at 10:09 PM 1 comment:

Hi,
My name is Jess and I have a knitting problem.
I have 3 sweaters in full swing, and I am about to start one more.
There is the Helleborus Yoke sweater from the newest issue of knitscene magazine. 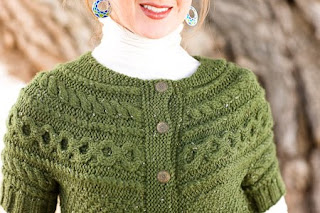 It isn't often that I have to make a sweater RIGHT NOW, but this one called to me.
I happened to have an appropriate yarn just waiting in my stash so I got the pattern last Saturday while I was working and started in knitting.
I had one false start, but I'm back on track and here is the front 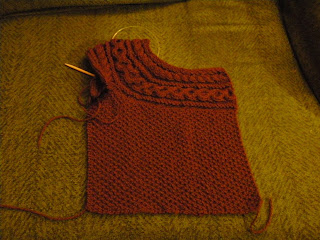 and now I have one of the sleeves done too. I'm using size 10 needles, which is helping this become a super speedy knitting project.
The pattern is written so that you work in a circle around the yoke, so the way the sweater is emerging is really very interesting and I just want to keep knitting and knitting to see what comes next.
It's a mid-range of difficulty kind of project. I can watch tv, but I still need to look down once in a while for the cables.

The second project on the needles is a yoke sweater from an old (as in about 5 years) Dale of Norway pamphlet. The hem is finished and now I have 15 inches of solid-color stockinette to finish. 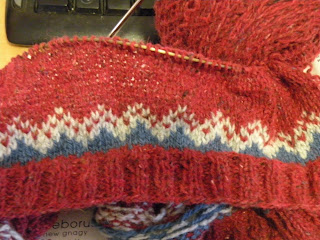 This one is going everywhere with me so the unending monotony of it doesn't drive me crazy.
It'll be good for riding in the car, or waiting to pick up the Younger Hug-a-Bug from school.

The third sweater is one that I am designing myself.
I bought the book "Here Be Wyverns" by Nancy Spies in 2003 when it came out. 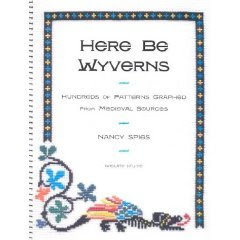 This book is a treasure trove of stitch patterns that the author gathered from medieval sources like tapestries and mosaics. 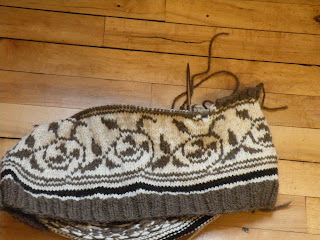 There are pockets, the facing of which is sticking up there on the right-hand side.
The next pattern that I plan to use has a long repeat (195 stitches) and I have to work myself up to actually begin it. 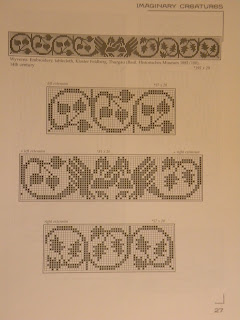 It's a totally awesome, and not totally un-dorky pattern.
As you look at the sweater, it looks like a swirly floral pattern, but then the center back is dragons.
Actually they're Wyverns (as in Here Be Wyverns) which are defined in the book as "a two-legged dragon having wings and a barbed and knotted tail"
I hadn't heard of a Wyvern before I saw this book, and not since then either until I saw a trailer for the newest disastrous creature movie on SyFy

Wyvern
An ancient evil has come to feed.

This movie looks scary in more ways than one...

On a more serious note, thanks to all of you out there who visited the Craft Hope for Haiti Etsy site.
The last update I saw was that they have raised over $20,000, and that's since last Thursday.
W.O.W.
That is a spectacular outpouring of love from the crafting community and I am proud to have been a part of it.
Posted by Jess at 10:14 AM 7 comments:

Today is my 400th post.
I am really enjoying this blog thing, and I appreciate all of you lovely folks out there who come and share this space with me.
A pretty relaxed day today, a visit to the Science Museum, lots of time with the kids and a new car.
Oh yeah, about that last one; the older of our two old cars died yesterday and so we spent the afternoon at the dealership buying a new (to us) car.
Lots of snow here still. Here are some shots of the Mississippi that I got today while at the museum. 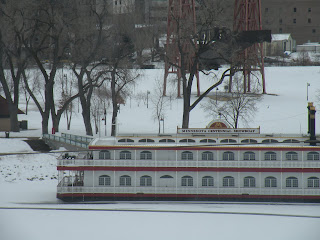 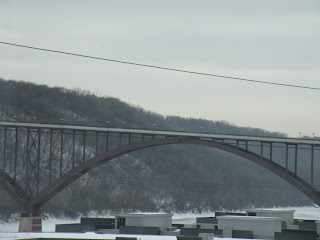 If you squint really hard you can see just about where the fifth lamp is, all the way at the top of the bridge.

Anyway, thanks for hanging out with me,
Jess
Posted by Jess at 7:00 PM 3 comments:

"Craft Hope is a faith-based, love inspired project designed to share handmade crafts with those less fortunate. It is our hope to combine our love for crafting and desire to help others into a project to make a difference around the world."
from the Craft Hope website.

I participated in one of the other Craft Hope projects, dolls for an orphanage, and their new project was an easy one to jump on board with as well.

The good folks at Craft Hope set up an Etsy site this week to sell the hand-made products of the crafting community.
100% of the profits will be donated to Doctors Without Borders.

I encourage anyone out there to become involved if you can, either by donating something or buying one of the hand-made items at the new Etsy site for Craft Hope Haiti.
Posted by Jess at 5:59 PM No comments: 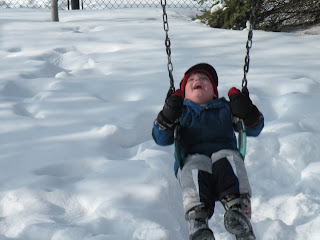 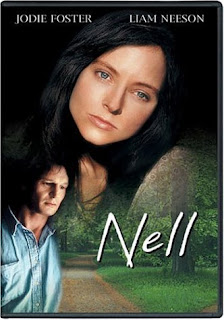 Timber Lodge Steakhouse, Nell and thou.
Happy Anniversary, my love.
It's been a wonderful 15 years.
Posted by Jess at 4:06 PM 5 comments:

Today was the birthday party for our newest 4-year-old, and it's all a blur.
One thing on the agenda which we didn't get to was tape the flame on the rocket- 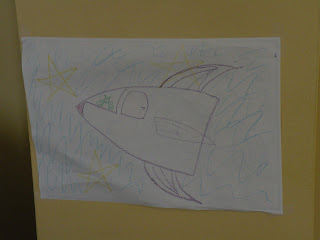 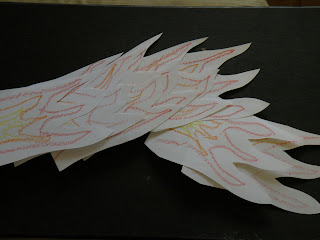 but there was still lots of cake, friends and presents to go around. 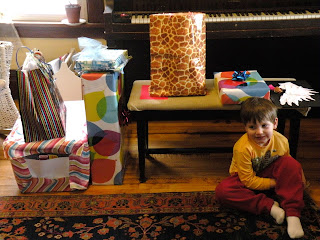 We almost forgot to give the big boy one present, a walkie talkie set.
I spent the last 30 minutes listening to conversations like this-
"Dada, Dada, do you read me?" "Yes, I read you" "Dada, I love you, over"
Posted by Jess at 5:54 PM 2 comments:

I ended up with some unexpected time this afternoon.
The Elder Hug-a-Bug was at school, and the Younger was invited to a friend's house, and instead of doing the dishes or folding the laundry I popped in Star Trek, ripped out an ill-fitting sweater and began swatching for a new one. 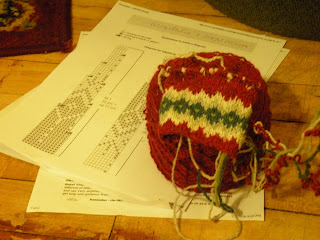 On the walk home from his play date I was also able to get some photos of a newly-minted 4-year-old who isn't too mature to indulge in some good old-fashioned snow eating. 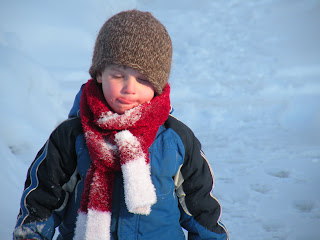 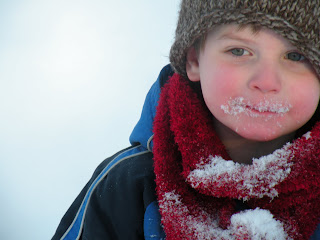 Add to that a completed pair of slippers 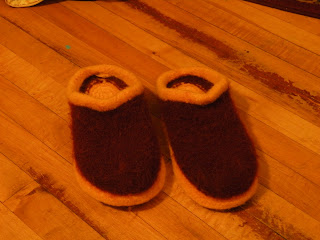 for my Gopher-loving, cold footed hubby, and you have a pretty good day.
Posted by Jess at 10:17 PM 4 comments: 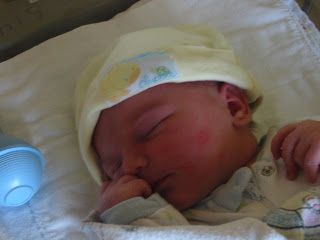 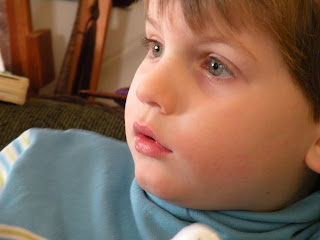 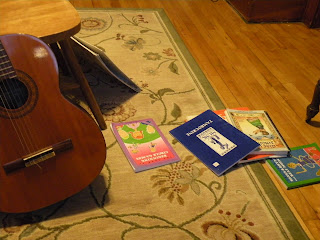 Planning out my curriculum for a new endeavor.
I am teaching a music class for 3-6 year olds.
It starts Tuesday.
I'm ready. 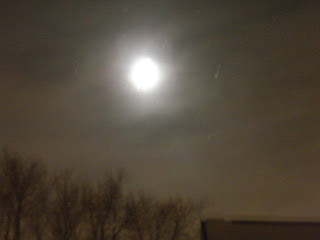 The full moon was shining brightly in the sky.
Posted by Jess at 9:03 PM 1 comment: