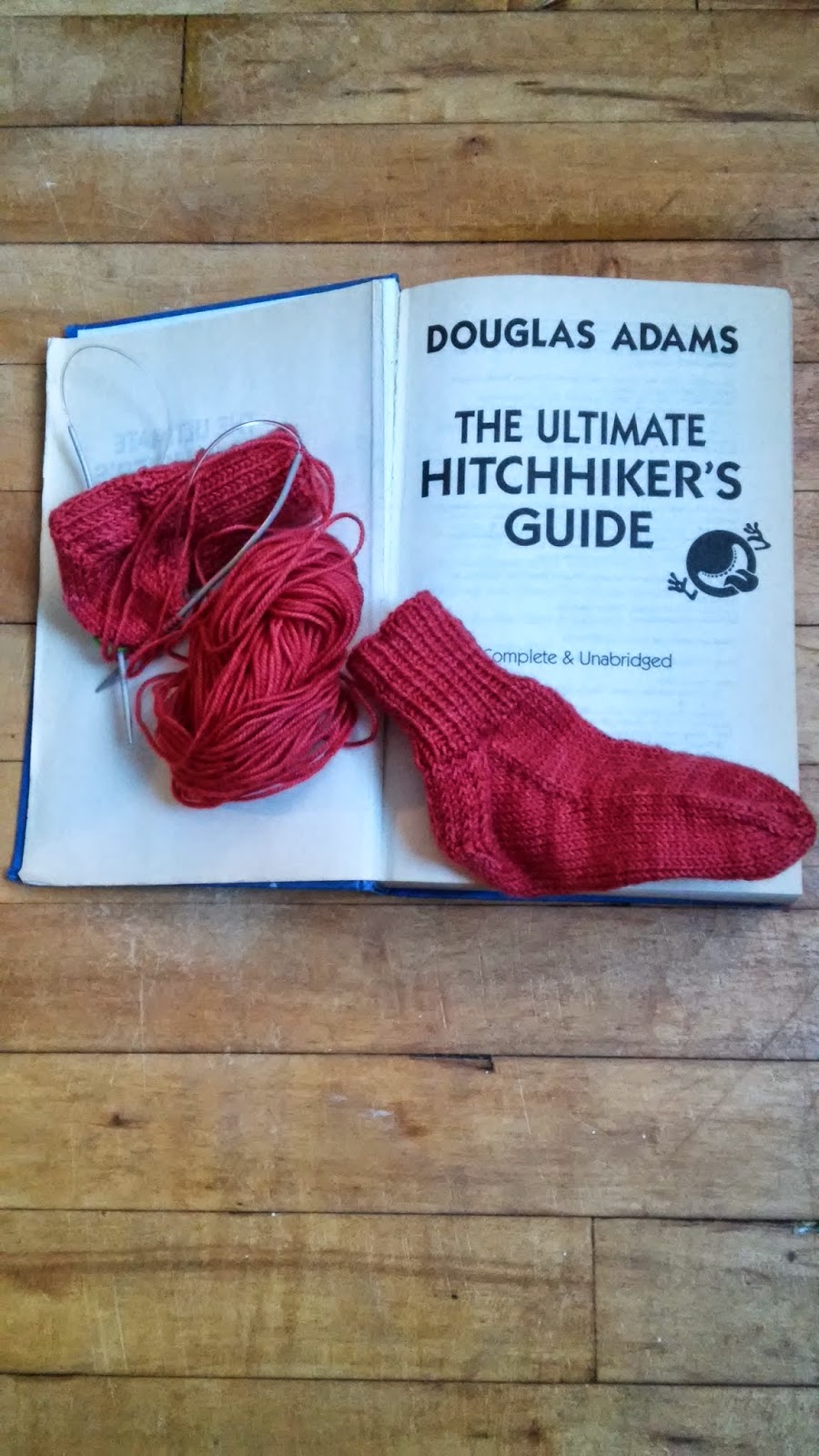 Even after a baby sweater, a hat and a pair of booties, there was still a sizeable amount of yarn left from my skein of Jitterbug. So, in the interest of using up the excess, I cast on a pair of socks for The Youngest.
She actually keeps socks on her feet, a first in this family as far as three-year-olds go, so I know that they'll be of use.

On the book front, I've been reading The Hitchhiker's Guide to the Galaxy aloud to the kids at night.
I grew up watching the BBC series as a kid.
We had it on a VHS taped from TV.
I didn't actually read it until I was in High School, but loved it then as well.
The kids are really digging it. They are a couple of hoopy froods.
As a bonus (or drawback?) we have all been singing So Long and Thanks for All the Fish on a loop.


Joining Ginny and Nicole this morning.
What's on your needles?
Posted by Jess at 7:56 AM 5 comments:

So Much Better than Staying in Watching Backyardigans. 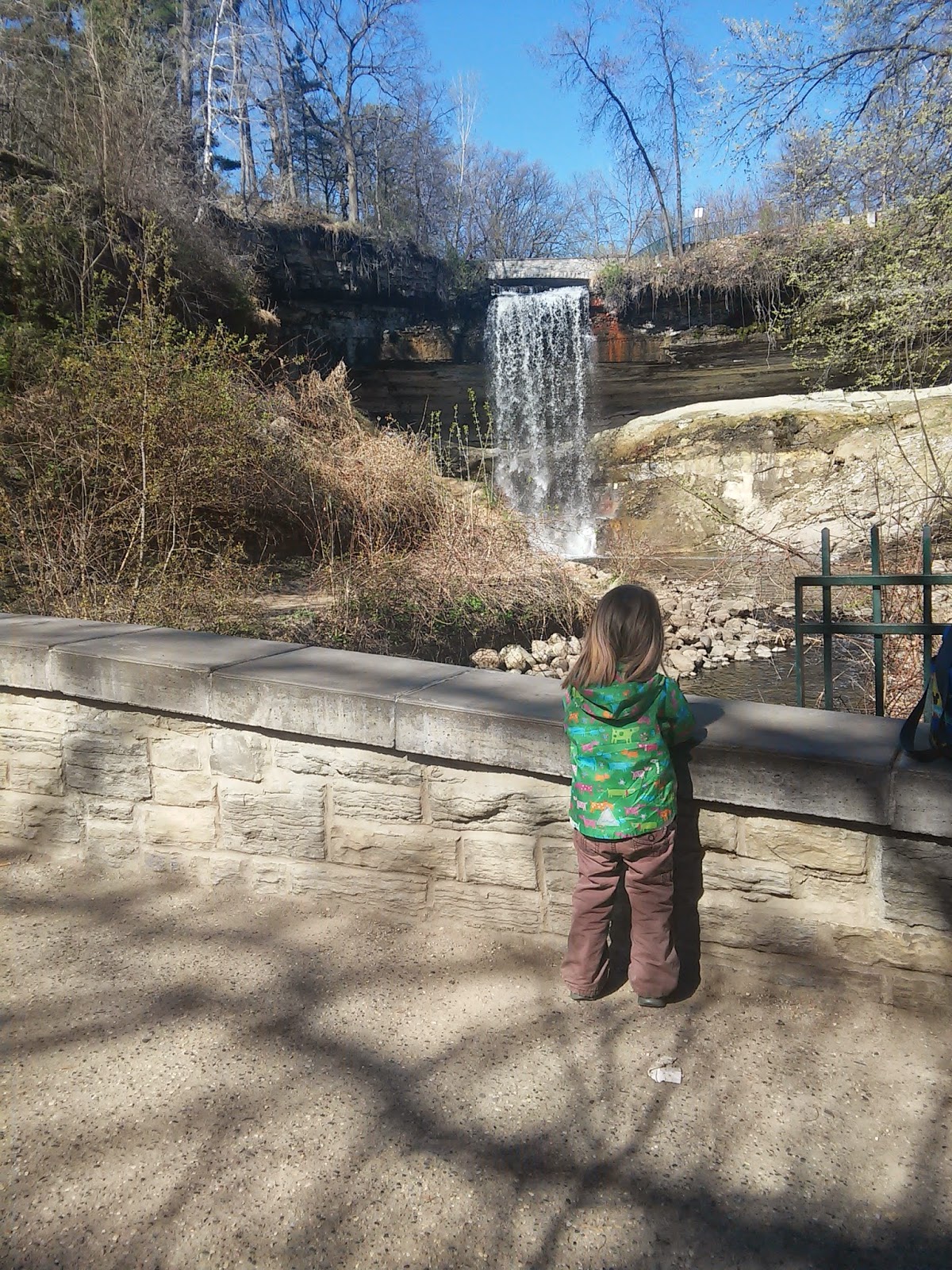 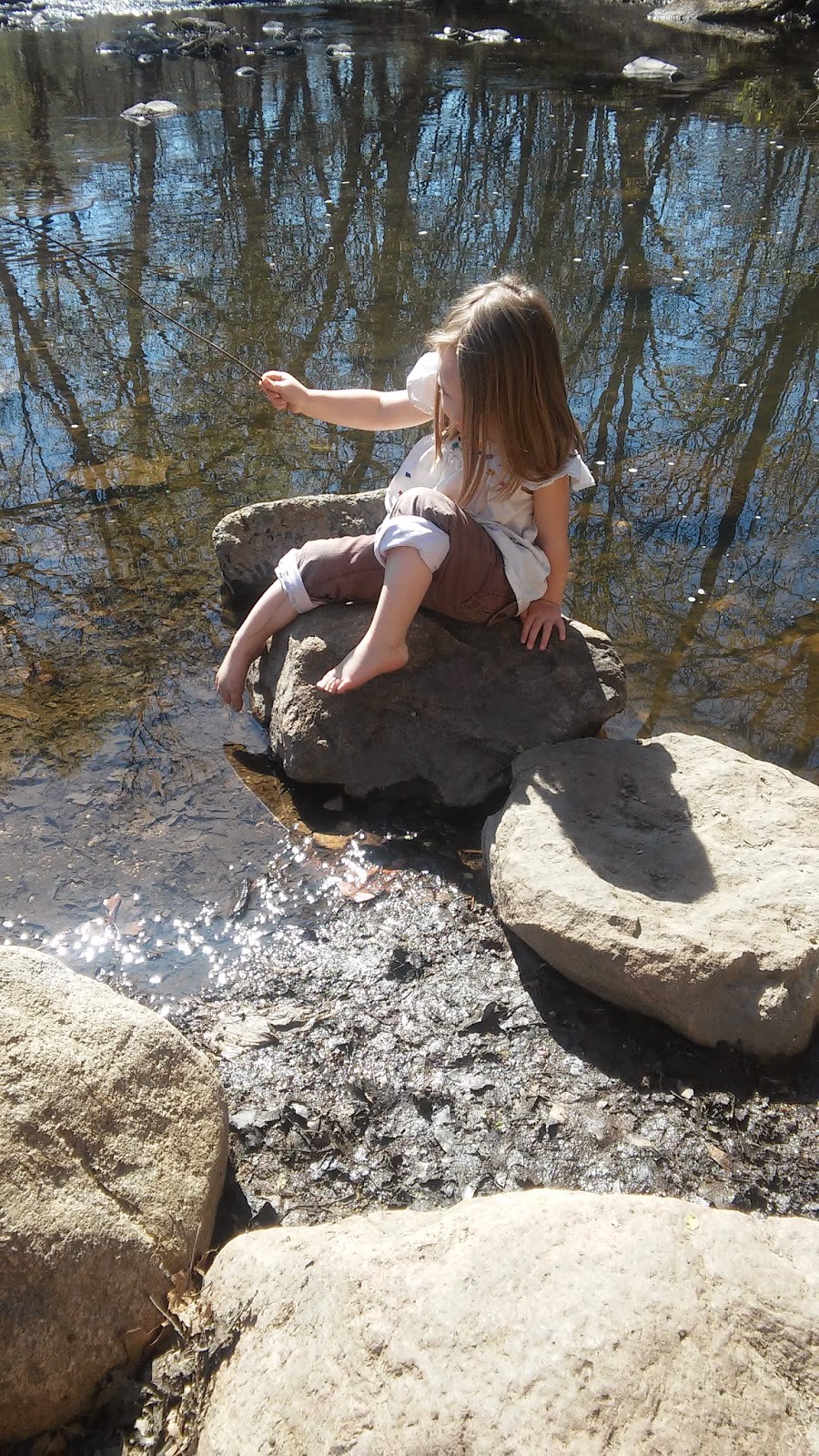 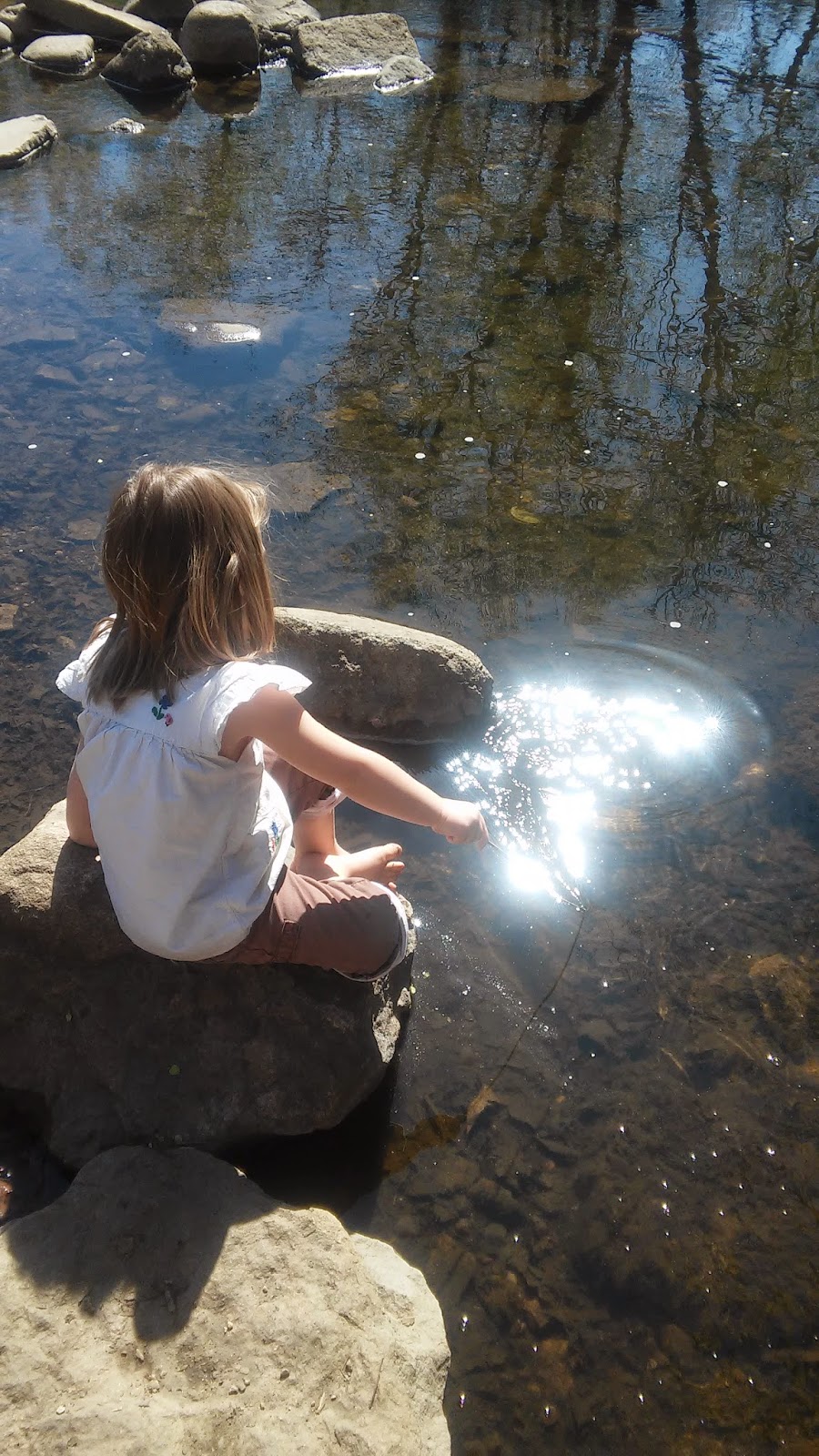 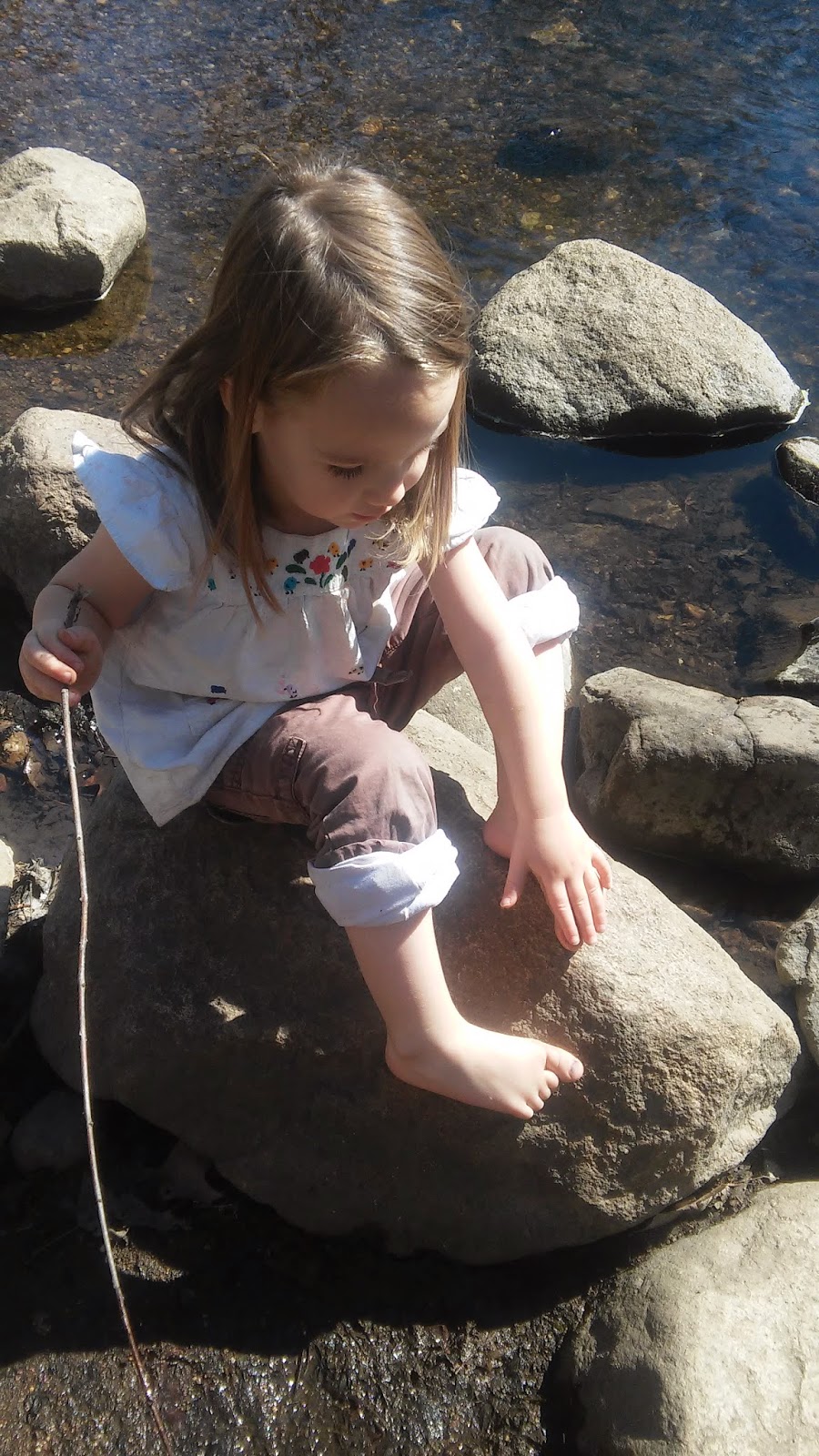 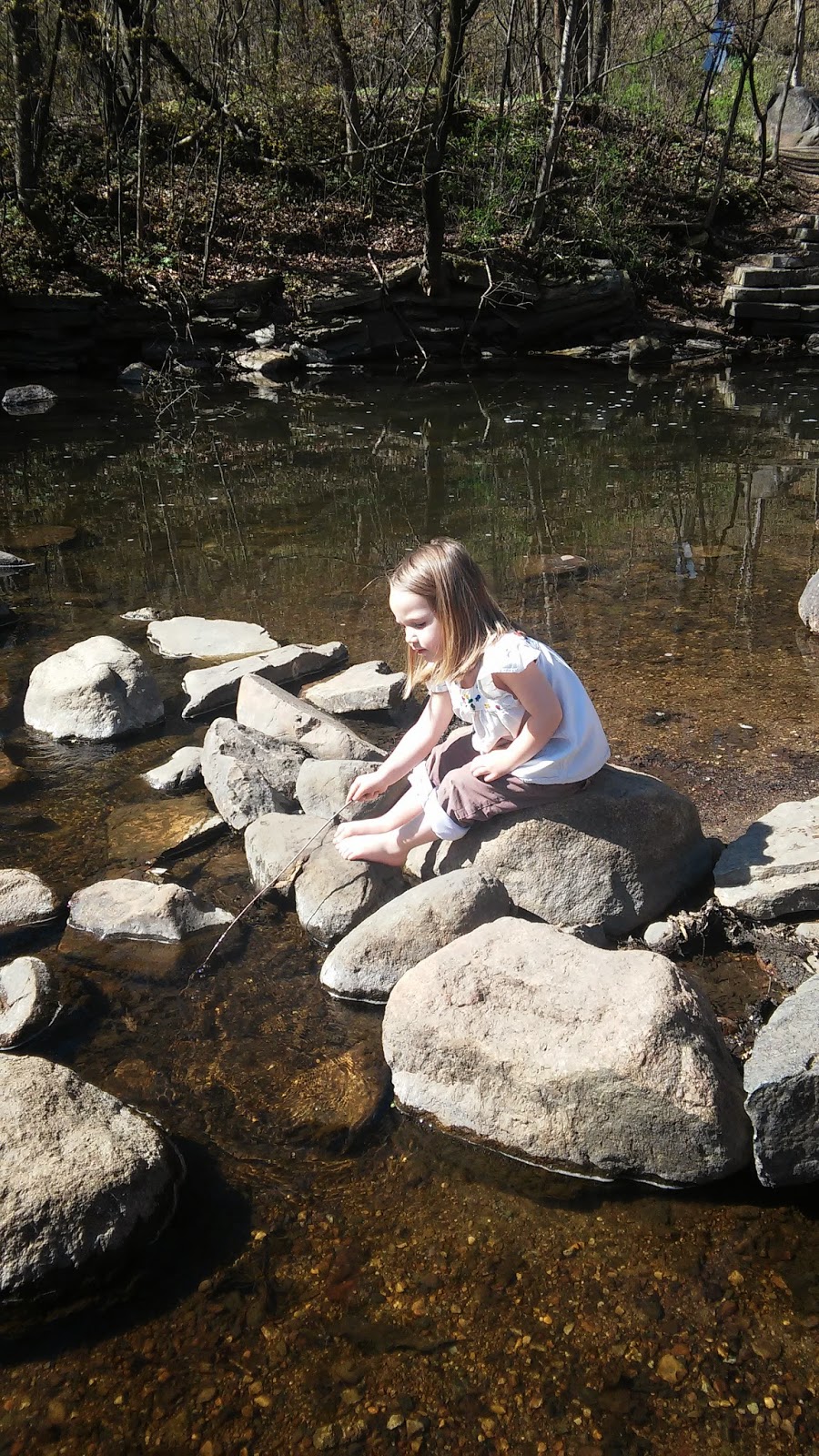 This morning, The Youngest and I ventured out to Minnehaha Falls, and had a beautiful time.
I've been busy with a volunteer project recently which has kept us at home even on the pretty days, but we played a little hooky this morning and it was so worth it.
Posted by Jess at 1:51 PM No comments:

Last Piece of the Present Puzzle 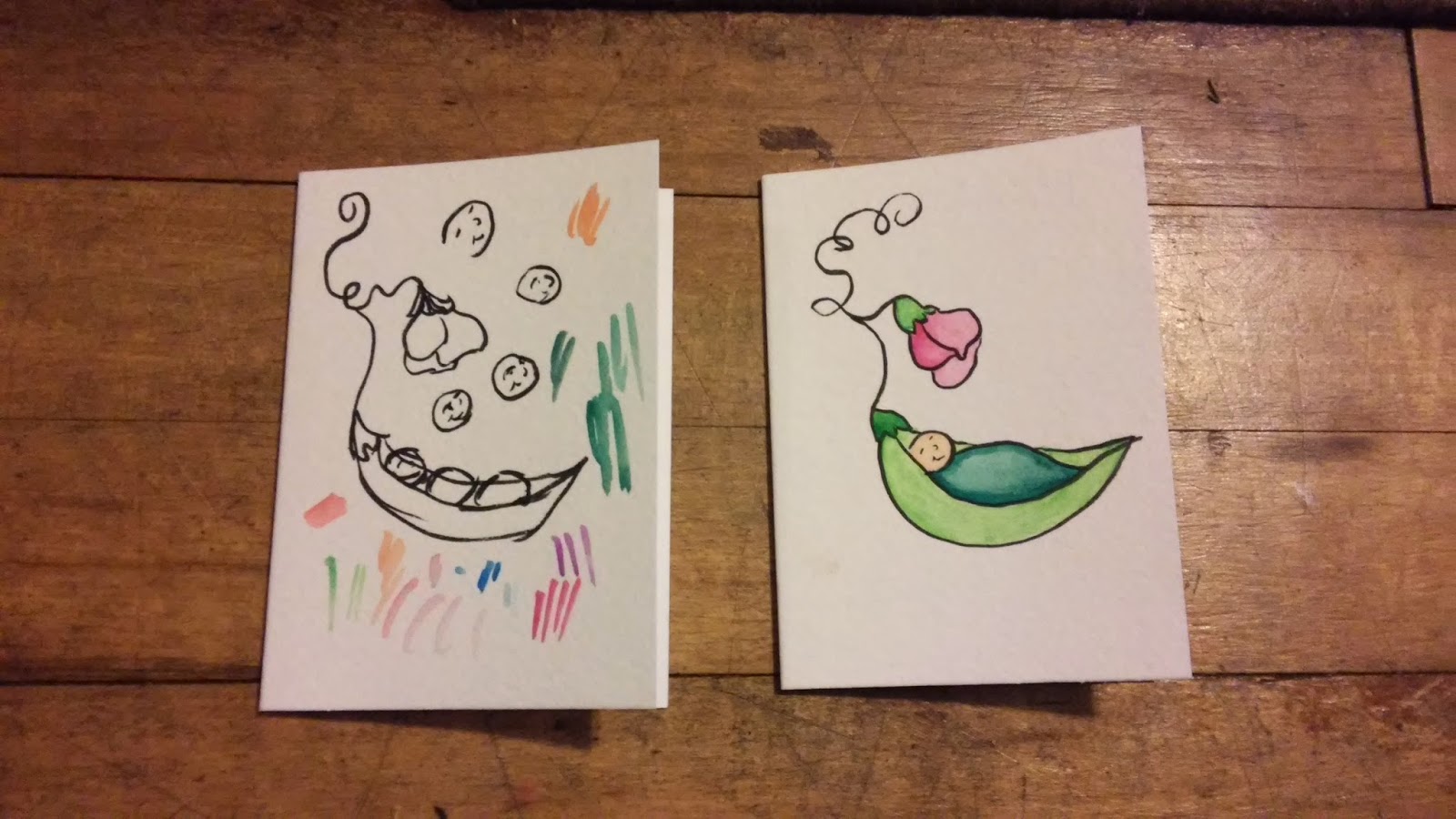 I was having a dickens of a time figuring out the card for my cousin's baby gift, but after a few dry runs I think I got it.
Posted by Jess at 7:28 PM 2 comments:

If you're like me you have been gleefully following Amanda's new obsession with rope baskets.
As you have seen again and again, I can't resist joining in when there is something inspiring out there in blogdom. 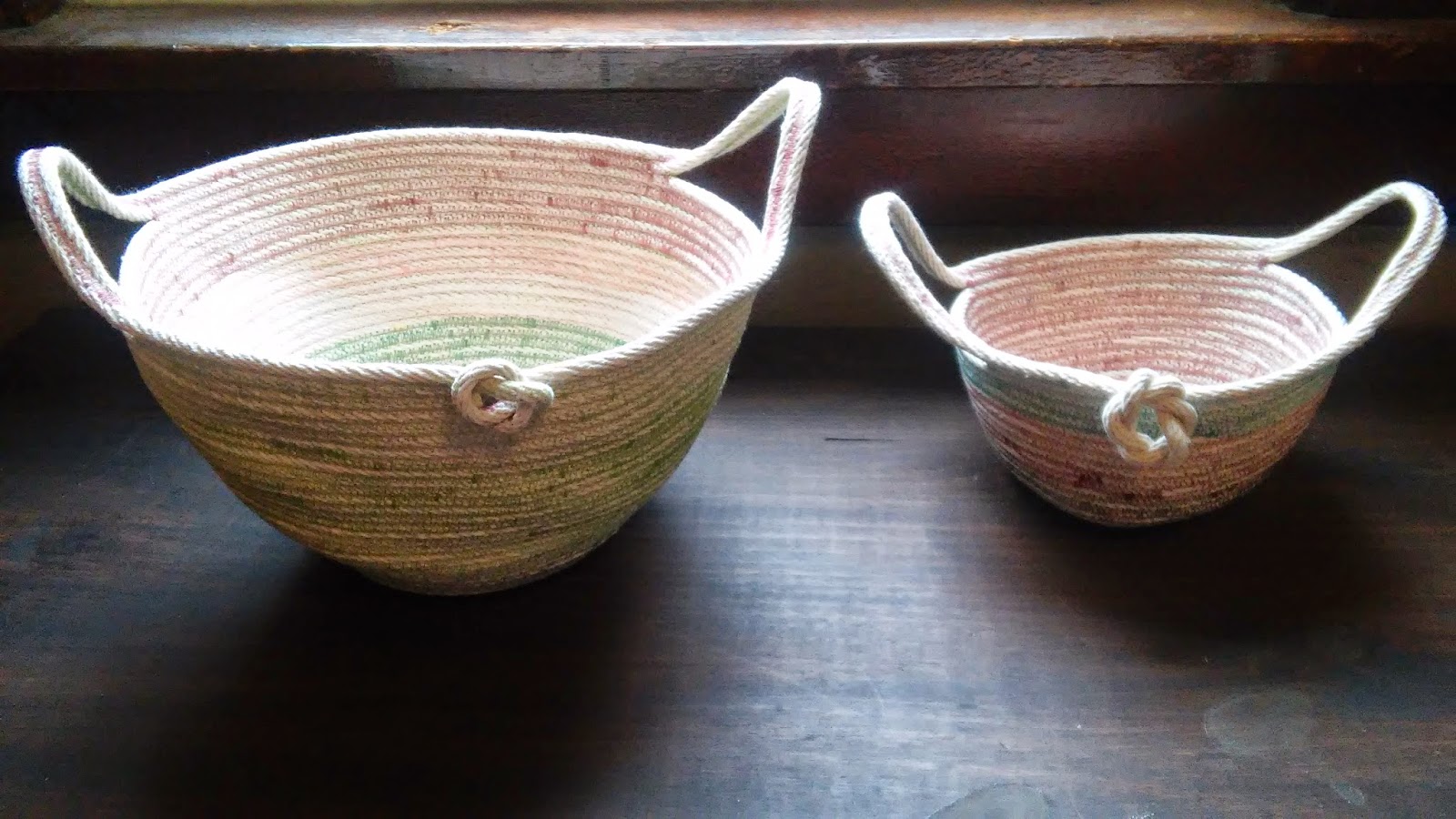 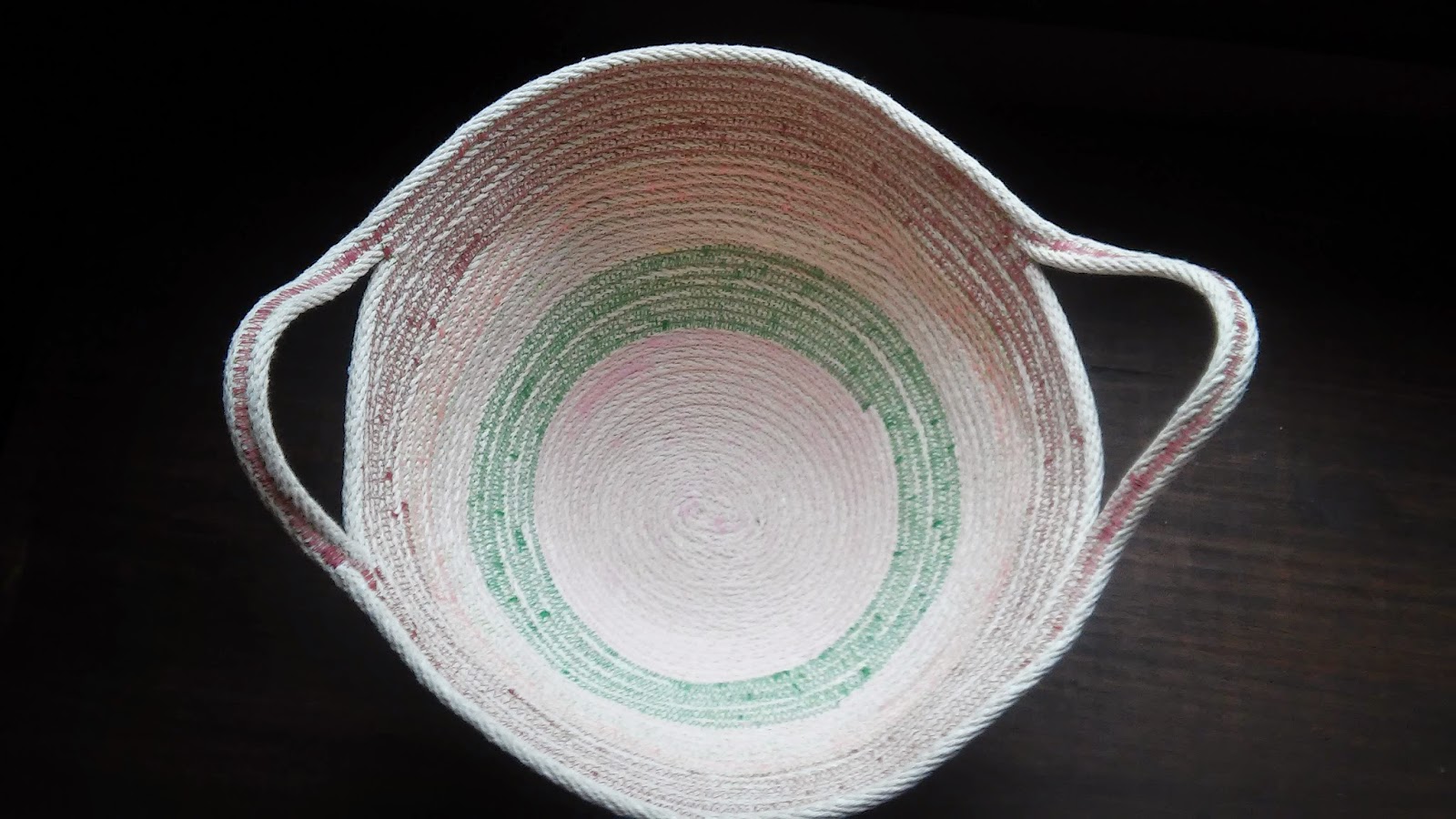 I saw these the first time a couple of years ago on Erin's  blog (and was super excited, you can see that I have the first comment on that post) and totally meant to make one then.
Life just got busy, I guess, but a couple of days ago I finally picked up some rope and dove in.
The first hurdle for me was realizing which way I was supposed to start stitching.
As it turned out, I was going the wrong direction at first and after 20 rows or so the bowl was too big to fit under my sewing machine.
So, my great plan to have a pink inside and a green outside was dashed.
I went with stripes instead, and it came out o.k.!
The most common comment about the construction of these bowls is that they eat up thread like crazy.
I decided to work with that, and with the smaller bowl I changed color every 3 rows to make stripes.
The outside of the large bowl has an ombre effect which isn't terribly noticeable in the photo, but came out nicely with three colors of green thread.

Before I started on the bowl project I had to unearth my sewing table.
It was a big job, there were remnants of 3 and 4-year-old projects buried under the mountain of yarn, fabric and detritus.
After about 90 minutes I could see the surface of my table, and I had a large bag of things to donate.
Flying high on the organizing bug, I took on our porch/playroom.
This one took a little longer, and I didn't have the assistance of The Elder as I did with my sewing table.
I think that last part was a blessing in disguise because I was pretty ruthless with the toys that made their way into the donation bag and the trash.
6 bags/boxes of things later, and I was left with this- 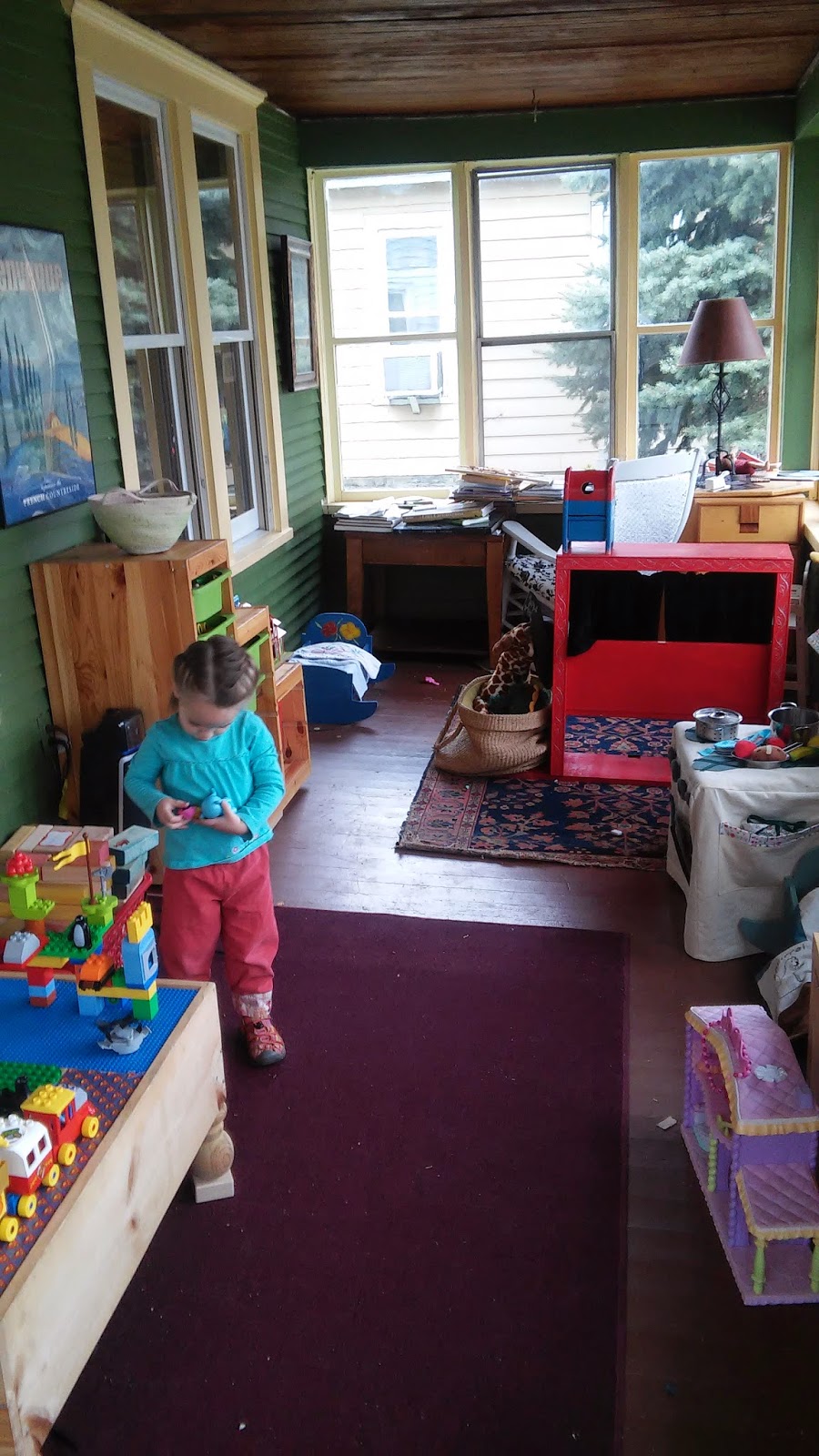 I'm pretty pleased with it so far.
There's still work to be done, we have 5 doll house/barn/castles (not including the one in the basement) which is ridiculous.
We have been accumulating them over 11 years of parenting, and most were gifts, but it's time to say goodbye.
Except not the vintage Tudor-style Little People house that I got at the thrift shop for 5 dollars.
That one is a treasure.
It's super fun to have the things I have made over the years for the kids all in one place, and even better, The Youngest played out there for a couple of hours and didn't ask to watch The Backyardigans once.

Back to the baskets, The Youngest has been thoroughly enjoying them.
She wore the small one to the grocery store yesterday- 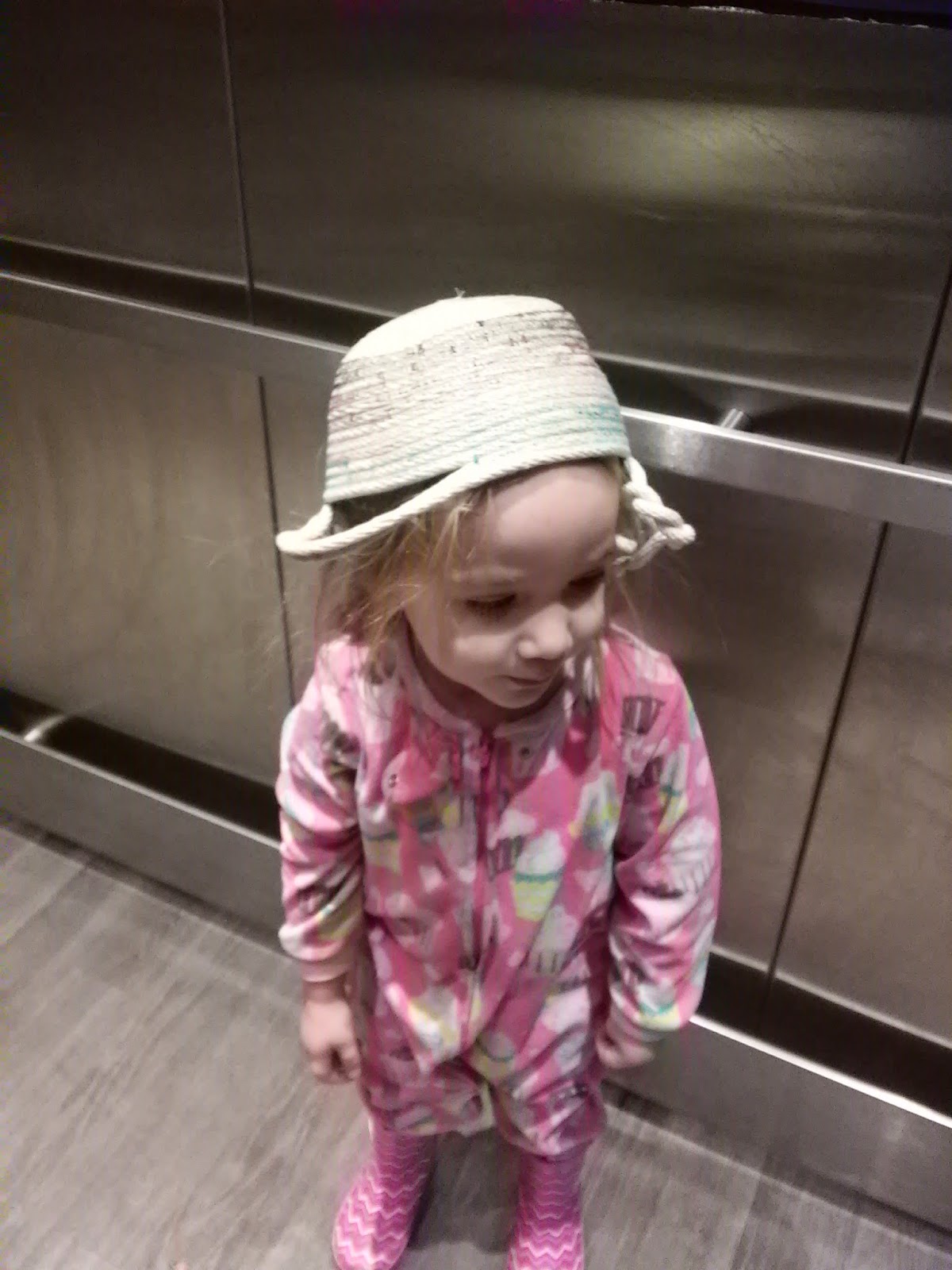 It was quite the ensemble...

Also, though I think the handles are a little off on the smaller basket, too long? too short? something is not working, they are quite useful. 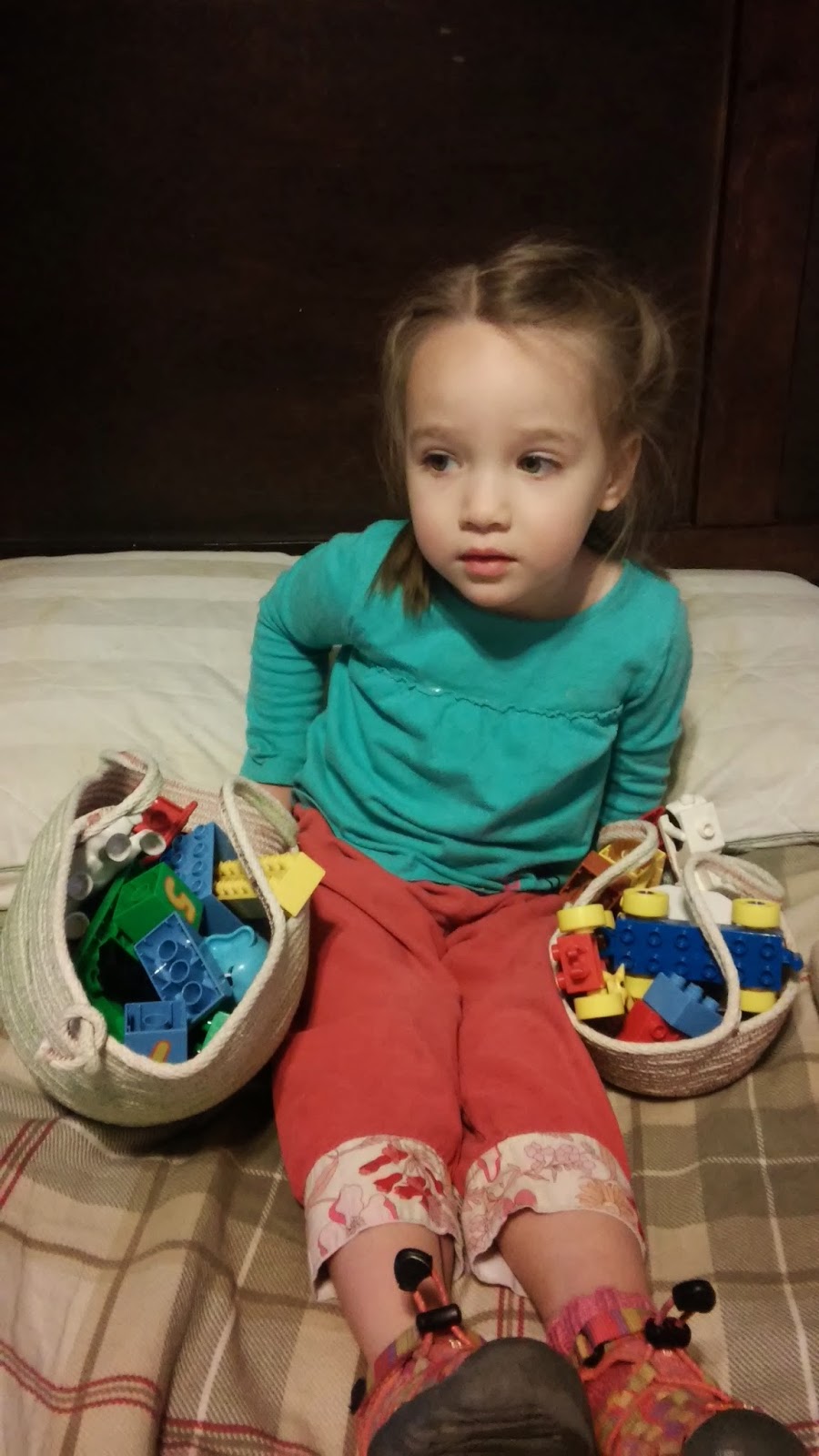 What are you creating today?

Thank You, and a Photo Essay

Thank you all so much for your sweet comments on my little knits.
I'm sure they'll be infused with all of that good feeling when my cousin-to-be puts them on.

On another topic, this school year I have been spending a lot of time in the car driving the kids to and from school.
Most days The Youngest will take a nice car nap, and when she does I head down to the river to meditate on the beauty around me. That sounds cheesy, but it's the truth.
I get a thrill when I see an eagle swoop down, or hear the birds singing, or the water lapping, or even the stillness. 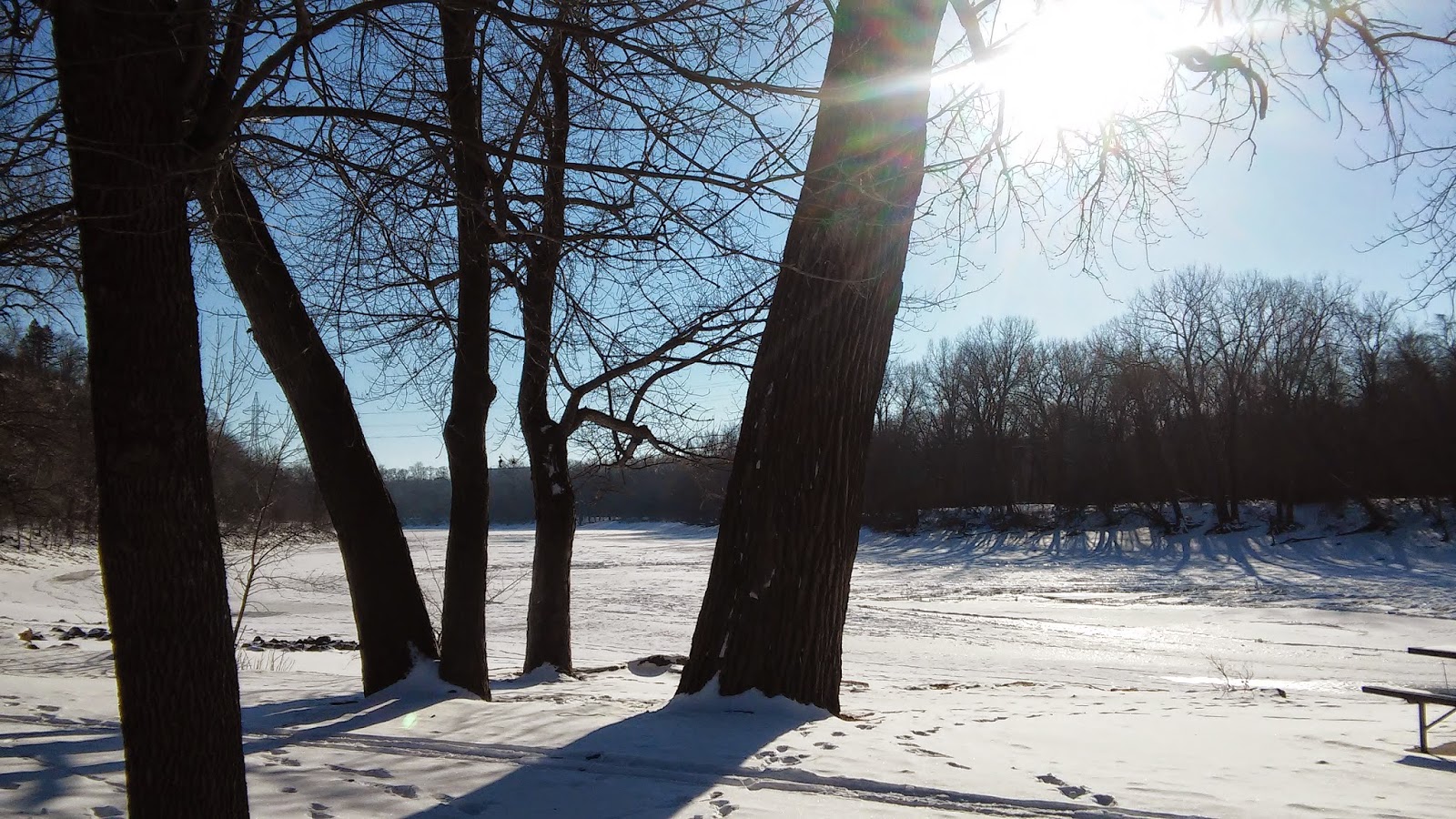 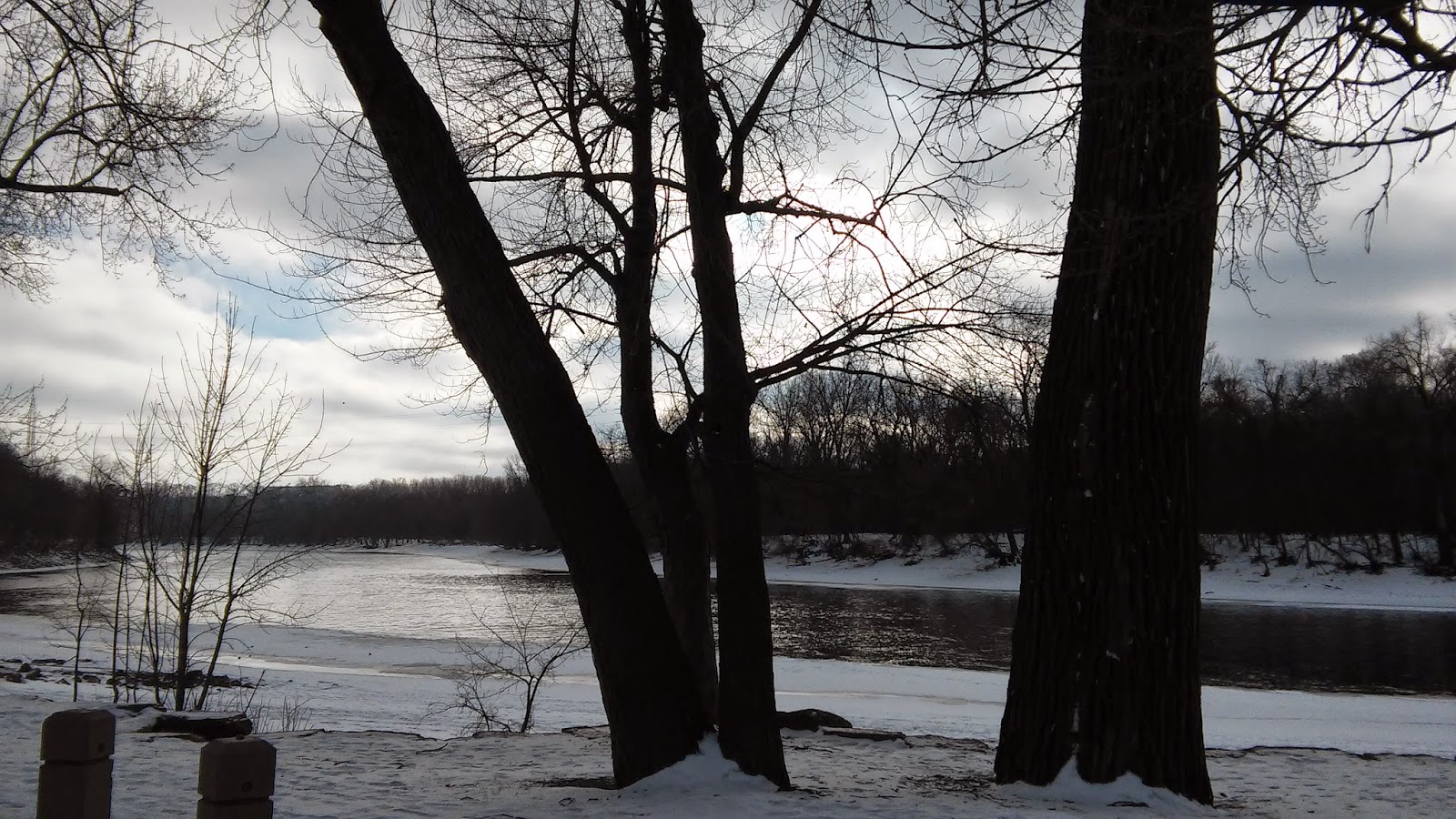 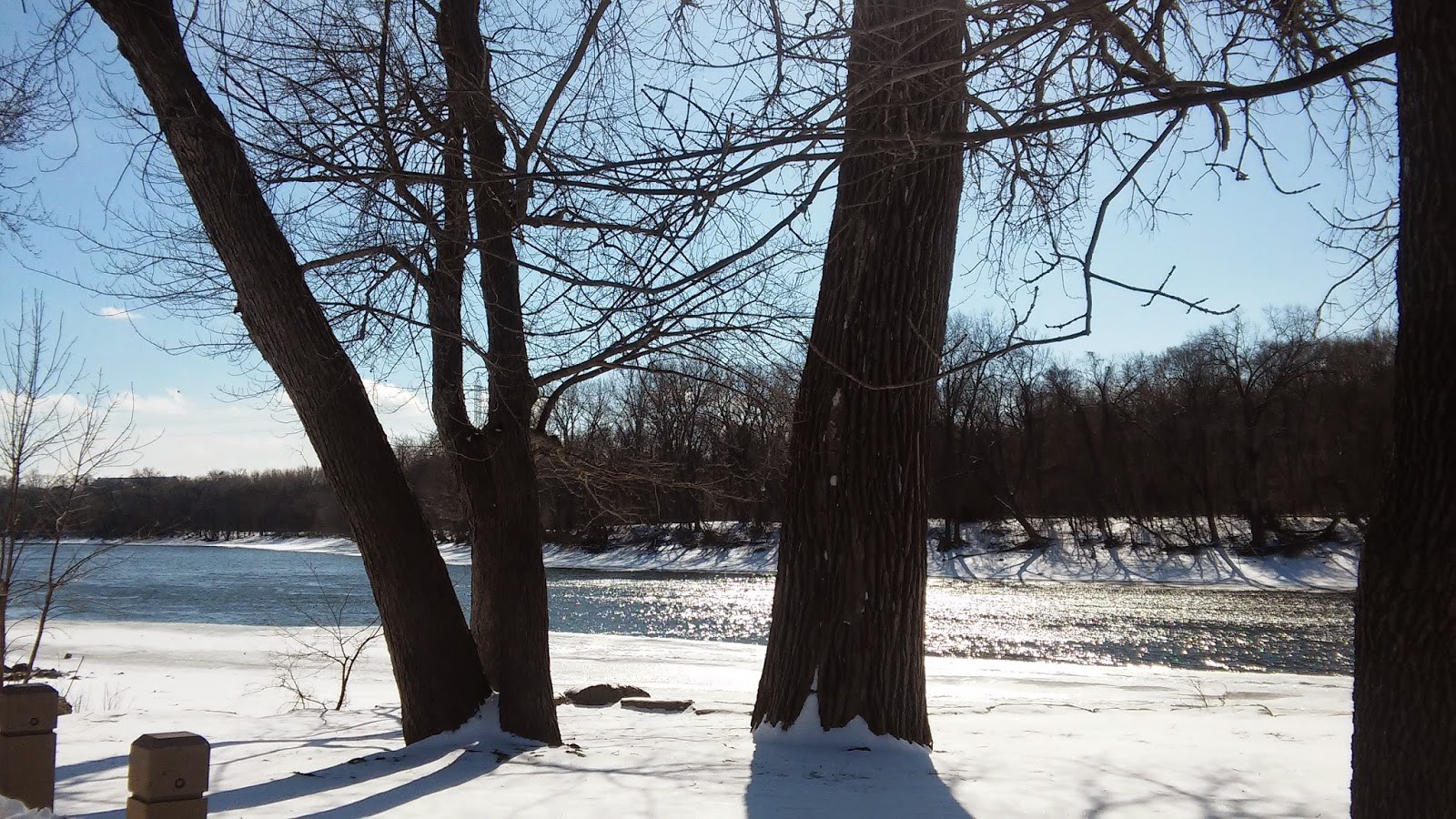 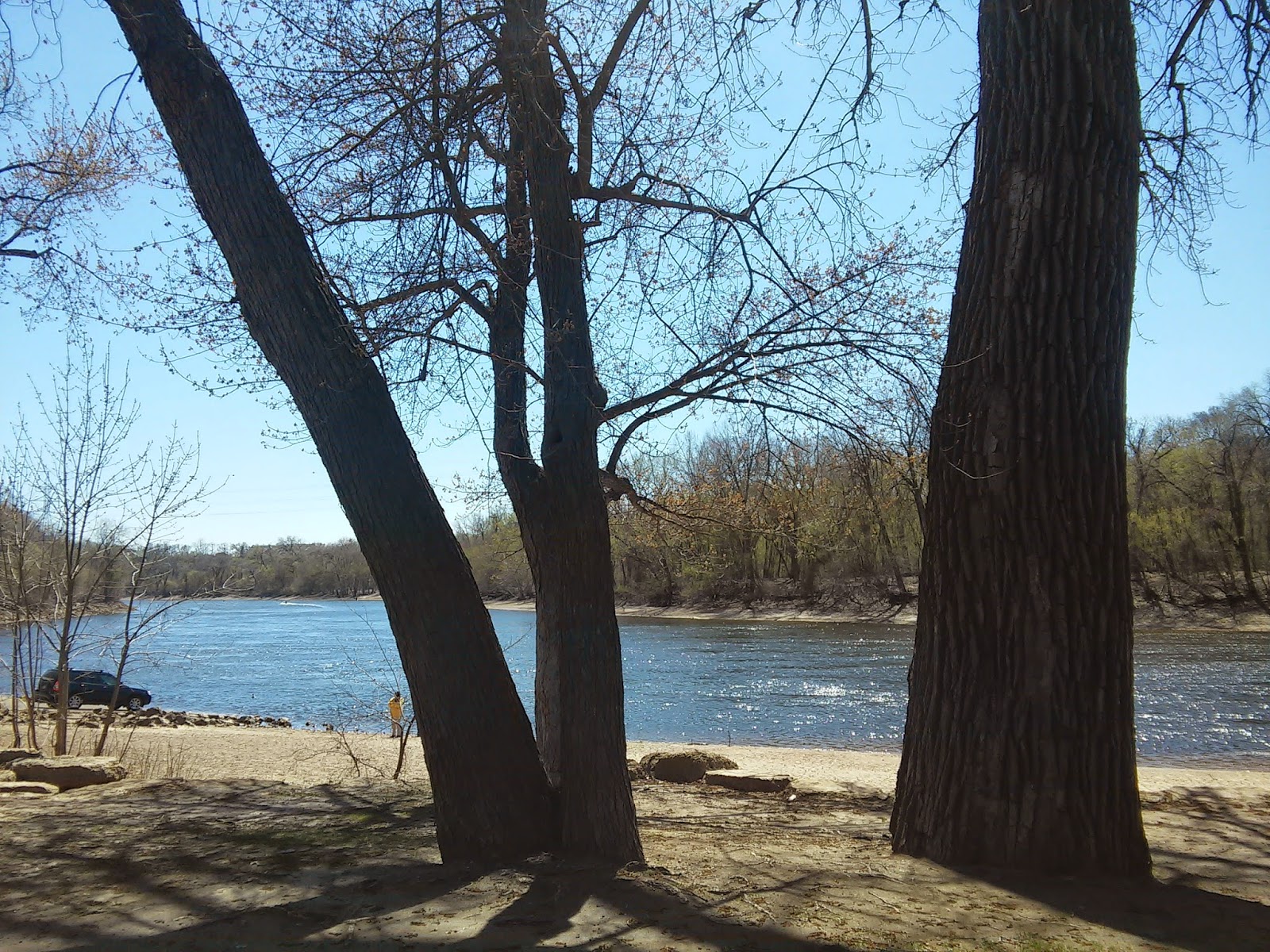 This week was a different kind of wonderful, the river was abuzz with people. There was a group of men fishing and a woman and a child rambling along the shore. Across on the other bank is a dog park, and there were doggies swimming in the water.
Spring has sprung, no doubt about it.

Another peek inside my mind, is that I am tickled to say this is my 1111th post.
Numbers are cool.
Posted by Jess at 10:26 AM No comments:

A Sweet Pea for a Baby-to-be

My little cousin is expecting her first child soon, and a request was made for me to knit a sweater.
I have seen so many different iterations of the Puerperium Sweater, I couldn't resist giving it a try.
Such a speedy knit, I started it on Friday and tonight all that remains is the buttons.
I can't decide if I want green or if I should try to match the melon color of the yarn. 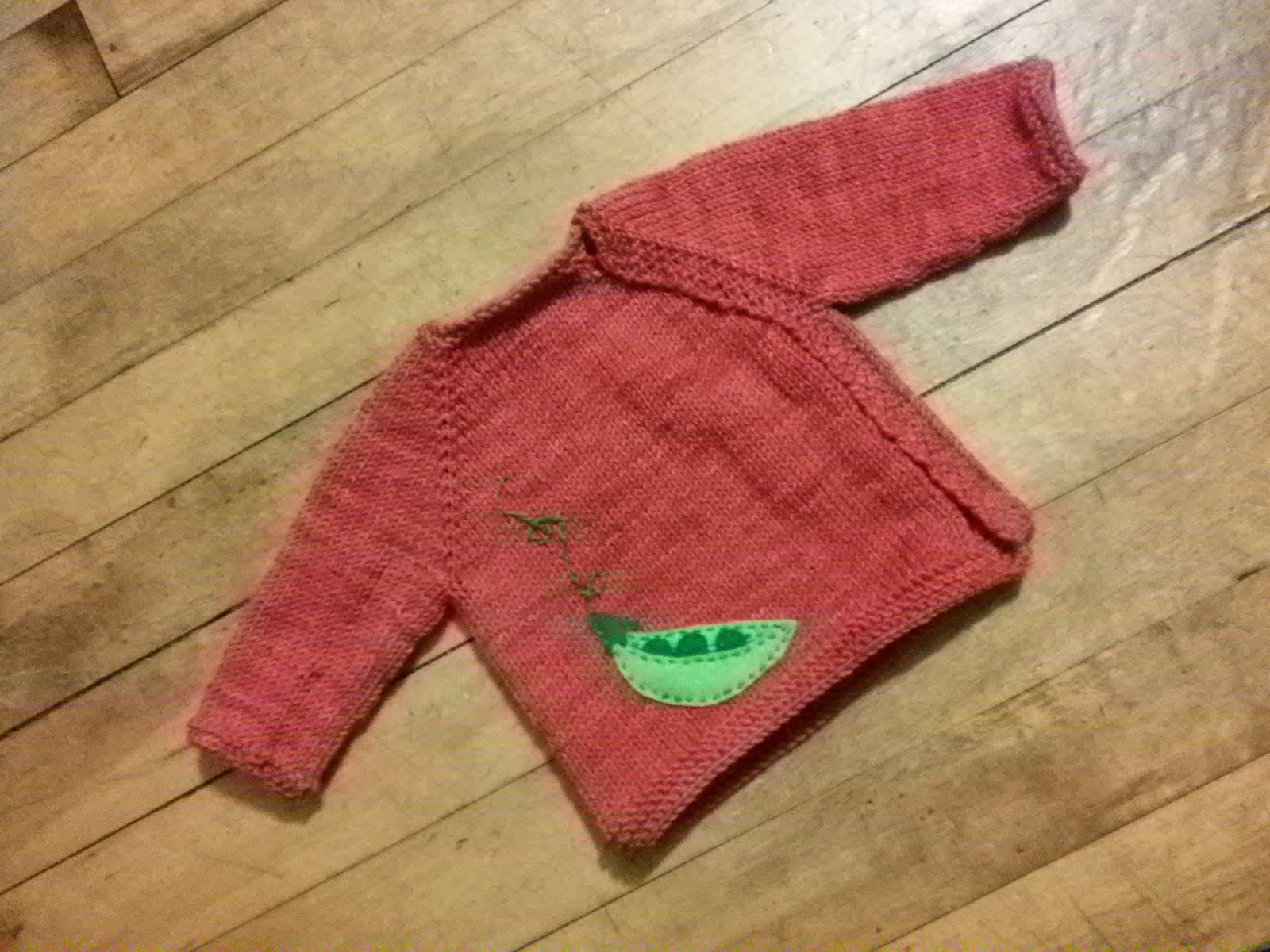 I will say that my knitting speed was greatly influenced by watching The Imitation Game. Such an exciting movie, my needles were flying!
What's on your needles tonight?
Update -
I just couldn't help myself... I had a lot of yarn left over, so I made a pair of Saartje's Bootees (with Rachel LeGrand's leafy variation) and a Super Quick Baby Bonnet. 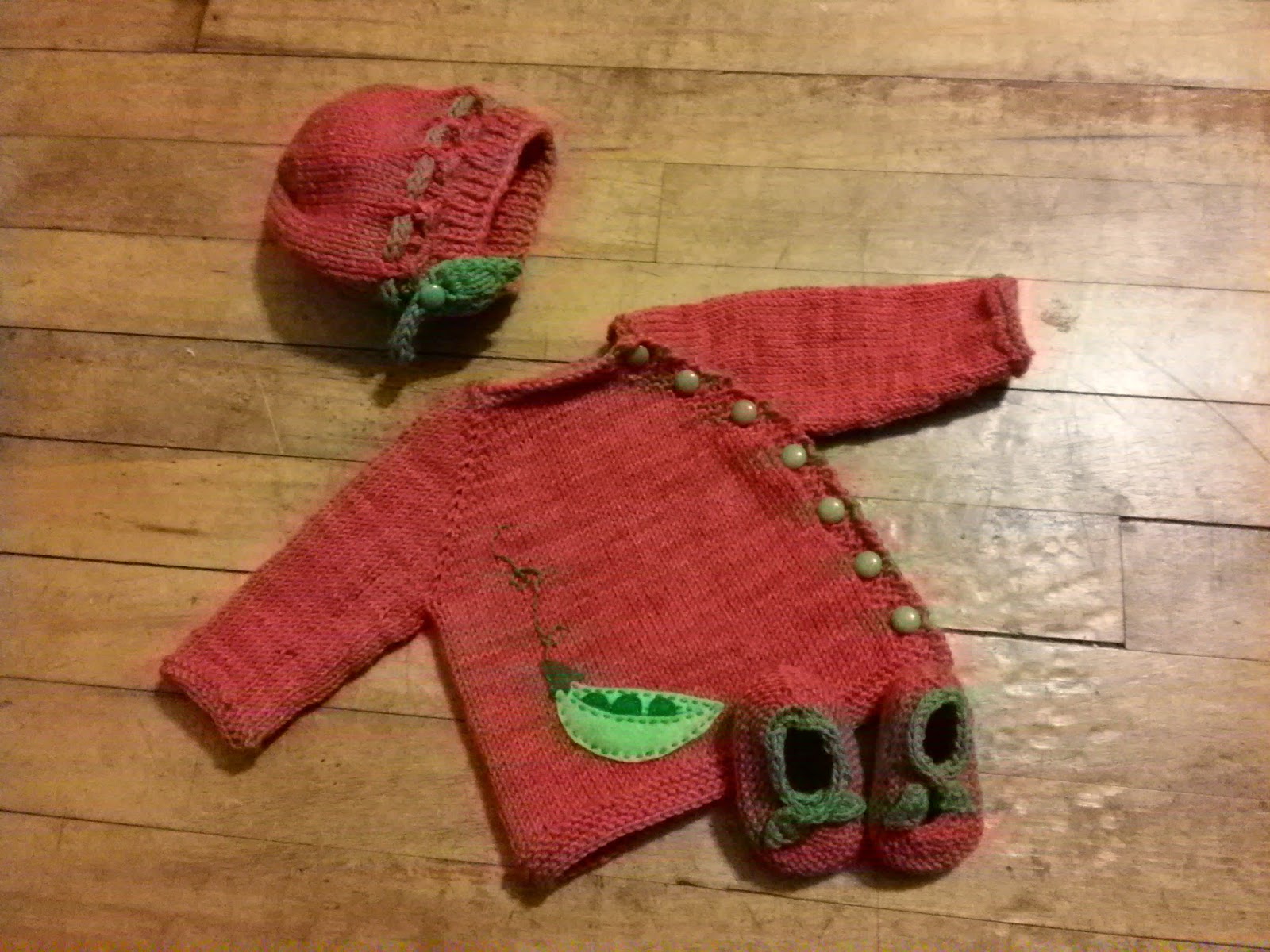 There was a series on PBS a couple of weeks ago that looked interesting to me, so I taped it and tonight I finally got around to watching the first episode.

It's a murder mystery set in Shetland (called Shetland), and there on the screen was Peerie Floores by Kate Davies. 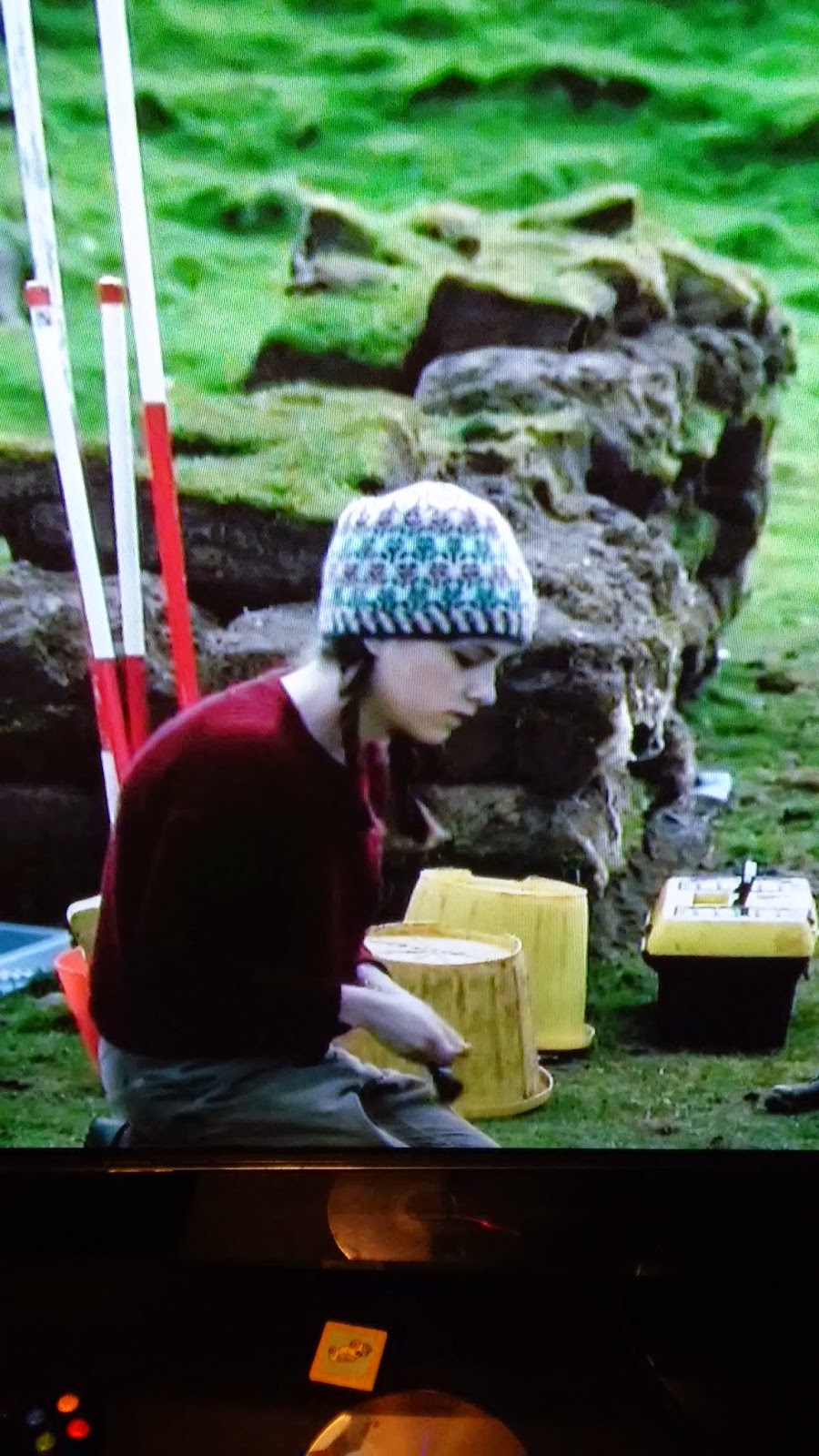 The mystery is pretty good, but the knitwear is spectacular. There was another scene with what appeared to be a natural version of the Puffin Sweater. 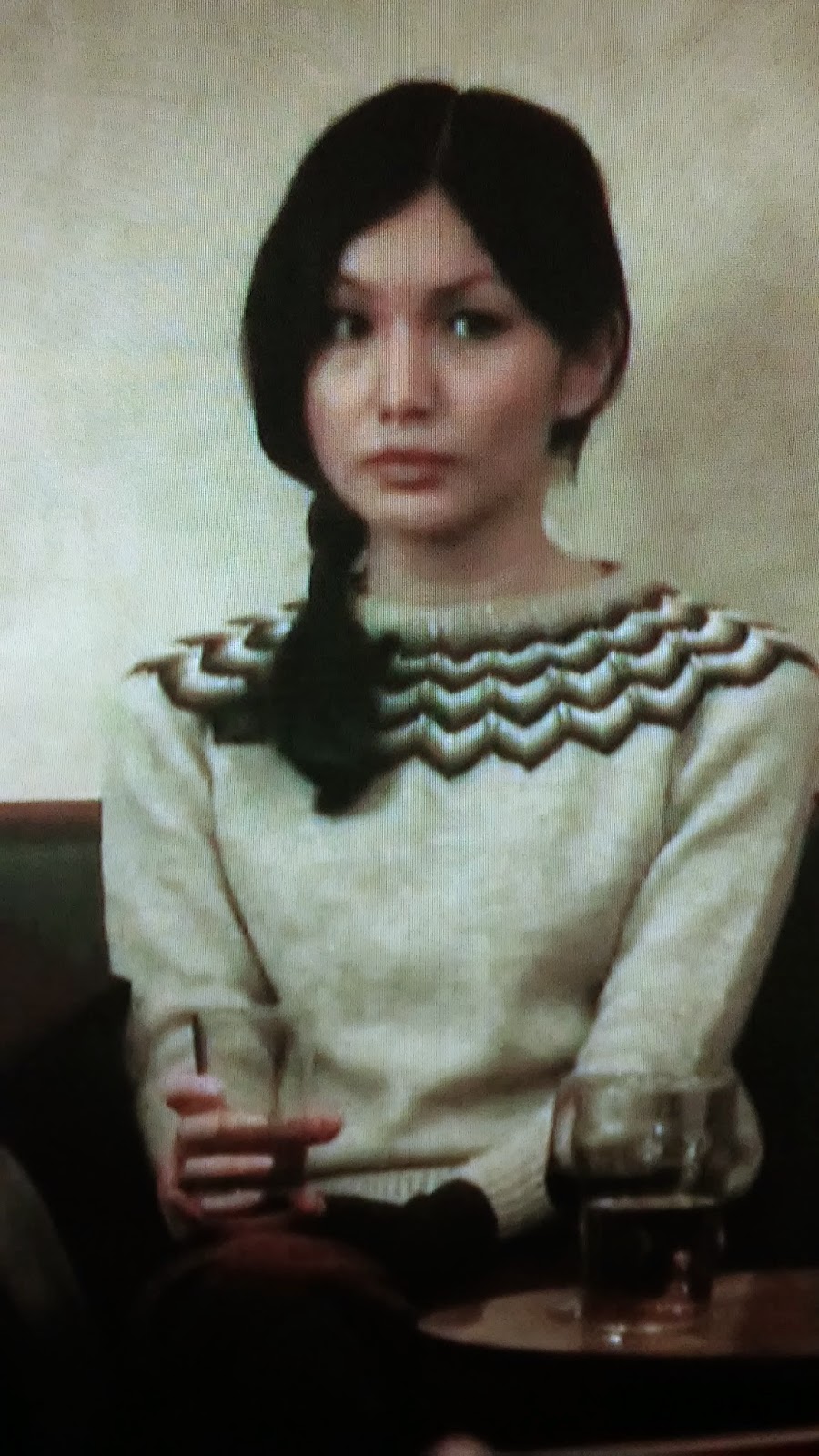 About two years ago I read on Kate's blog that she had a few designs on this program, but I forgot all about it until today.
Such delicious knits, I highly recommend finding this show, if only too drool.
My own knitting has been cooking along. I've made some headway into Pioneer Girl as well. 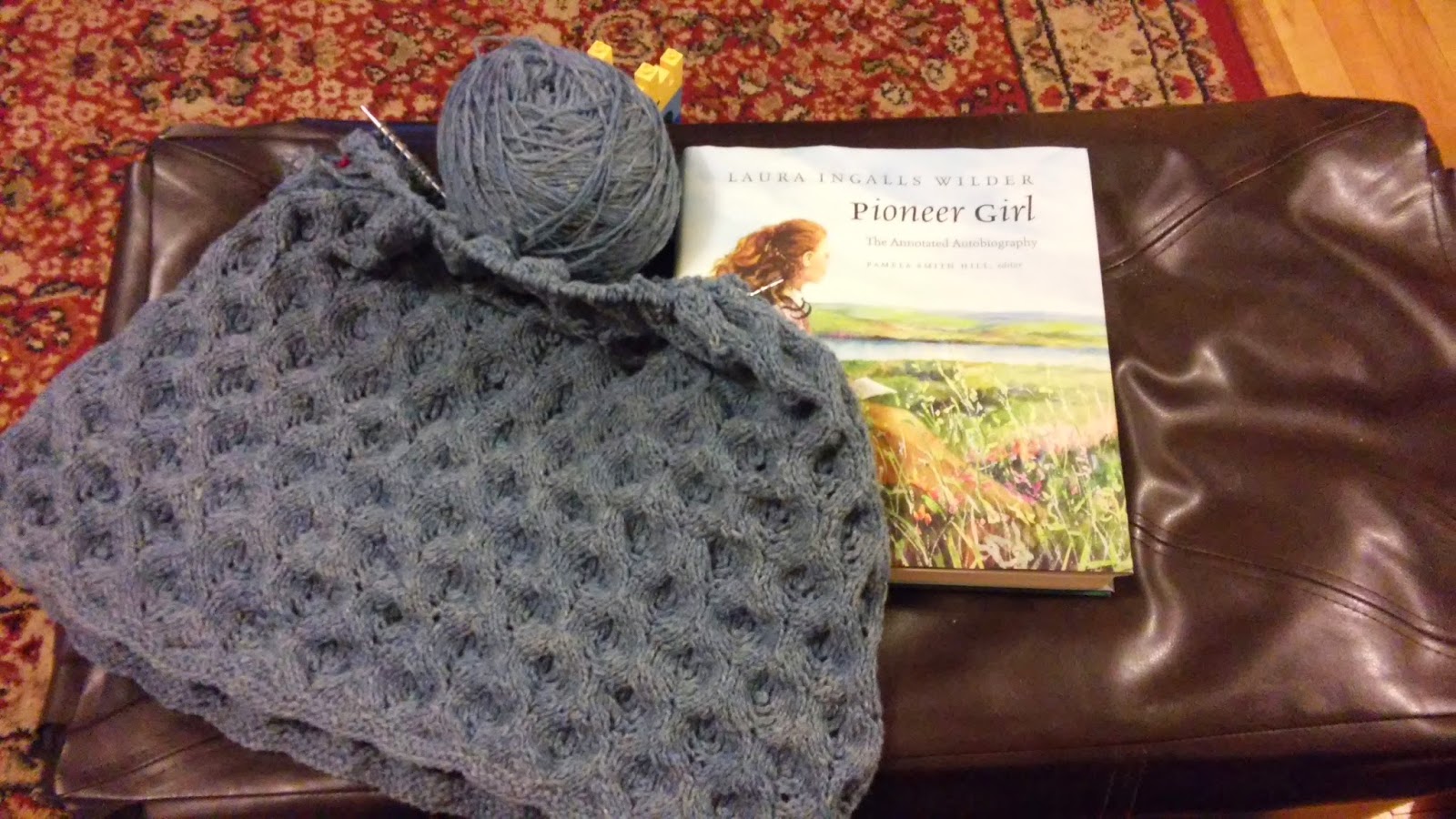 What's on your needles today?
Joining Ginny and Nicole

Actually, she can say three years old, but her older sister couldn't at this age, and I kind of miss that stage of baby speak.
Because, this tiny person is now three years old! 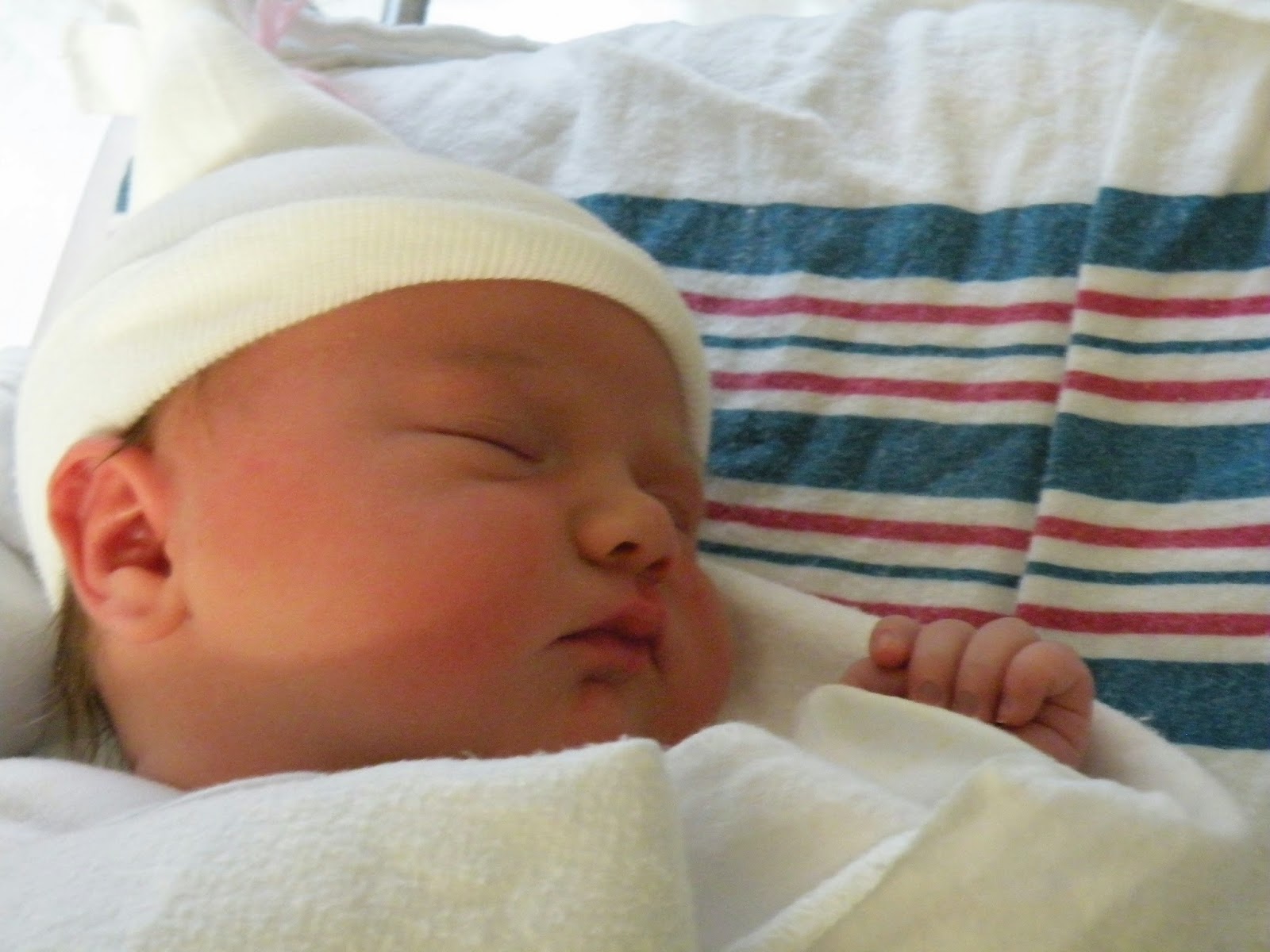 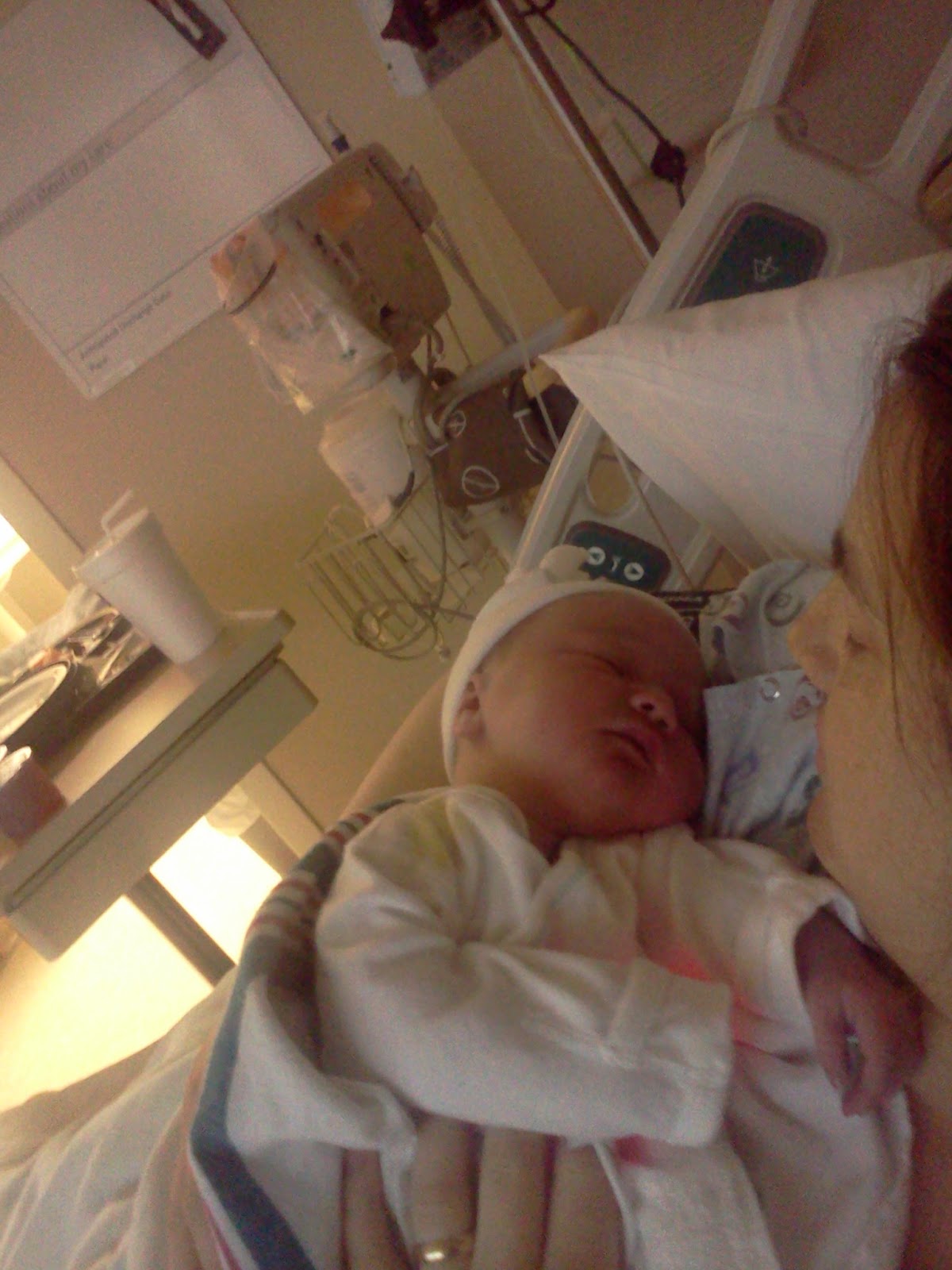 The Youngest is growing every day.
She loves to read books and sing songs and play dolls.
She loves to climb and run and throw.
She is right on track, developmentally speaking, for the perfect amount of 3-year-old sass. 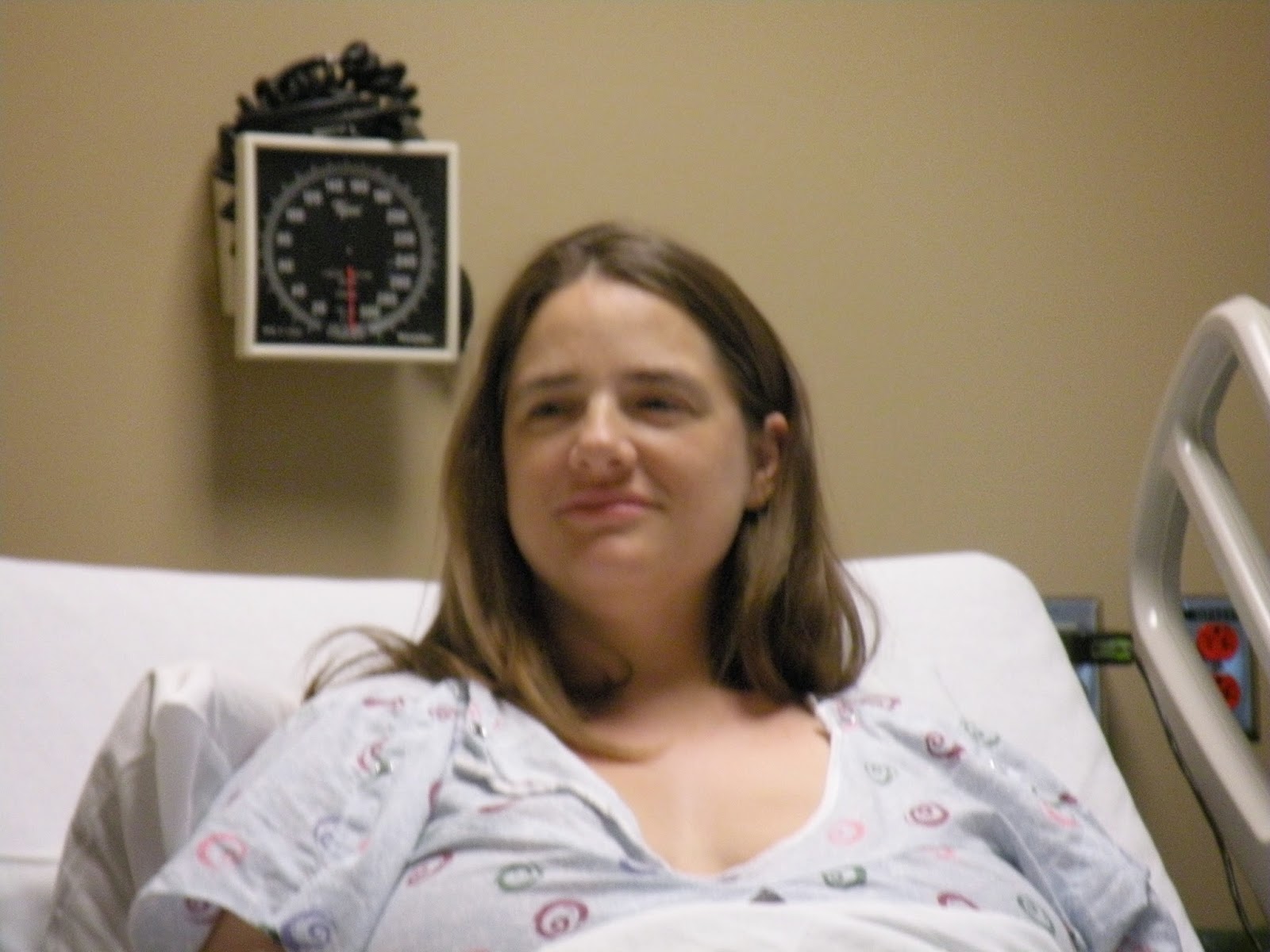 I'm feeling a little wistful this morning.
I'll never have such a tiny baby again.
It's the end of one chapter, but the continuation of the rest of the parenting story.
The Elder is heading to Middle school in the fall, The Younger is growing more mature every day and then one more year with The Youngest at home before she is school-bound.
It's the blink of an eye.
Posted by Jess at 7:25 AM No comments:

There Must Be Something More to Us...

So, there we were at Target, and what do I see but Charlotte's Web for $5.00.
Since it was one of my favorite movies as a kid (tied with The Secret of NIMH) I snapped it up.
The Youngest has been thoroughly enjoying it, and the other day she saw my go-to book of toy patterns and pointed out Wilbert on the cover. 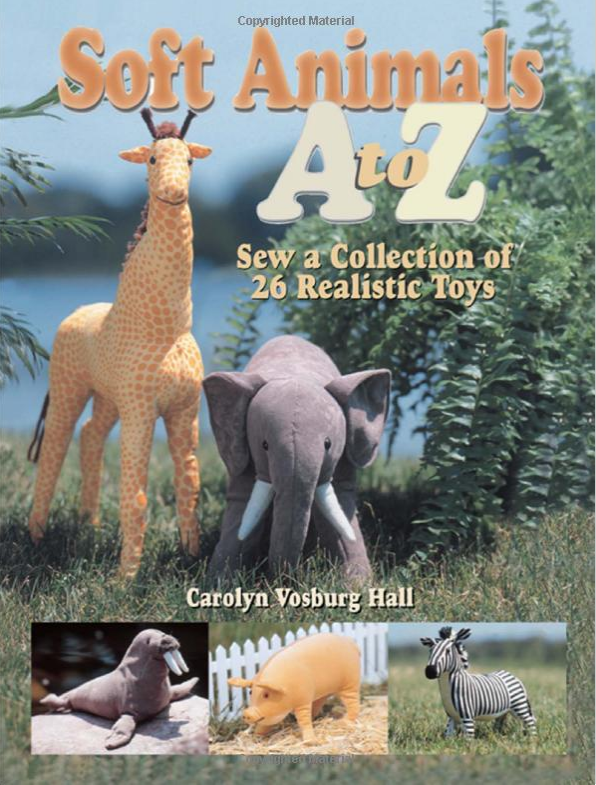 (Yeah, it is Wilbur, but she will not be convinced of that fact.)
This morning I had an extra hour or so, so I whipped up the Wilbert toy in time for our early birthday party with the grandparents. I used all stash fabric and stuffing, so her present was free! 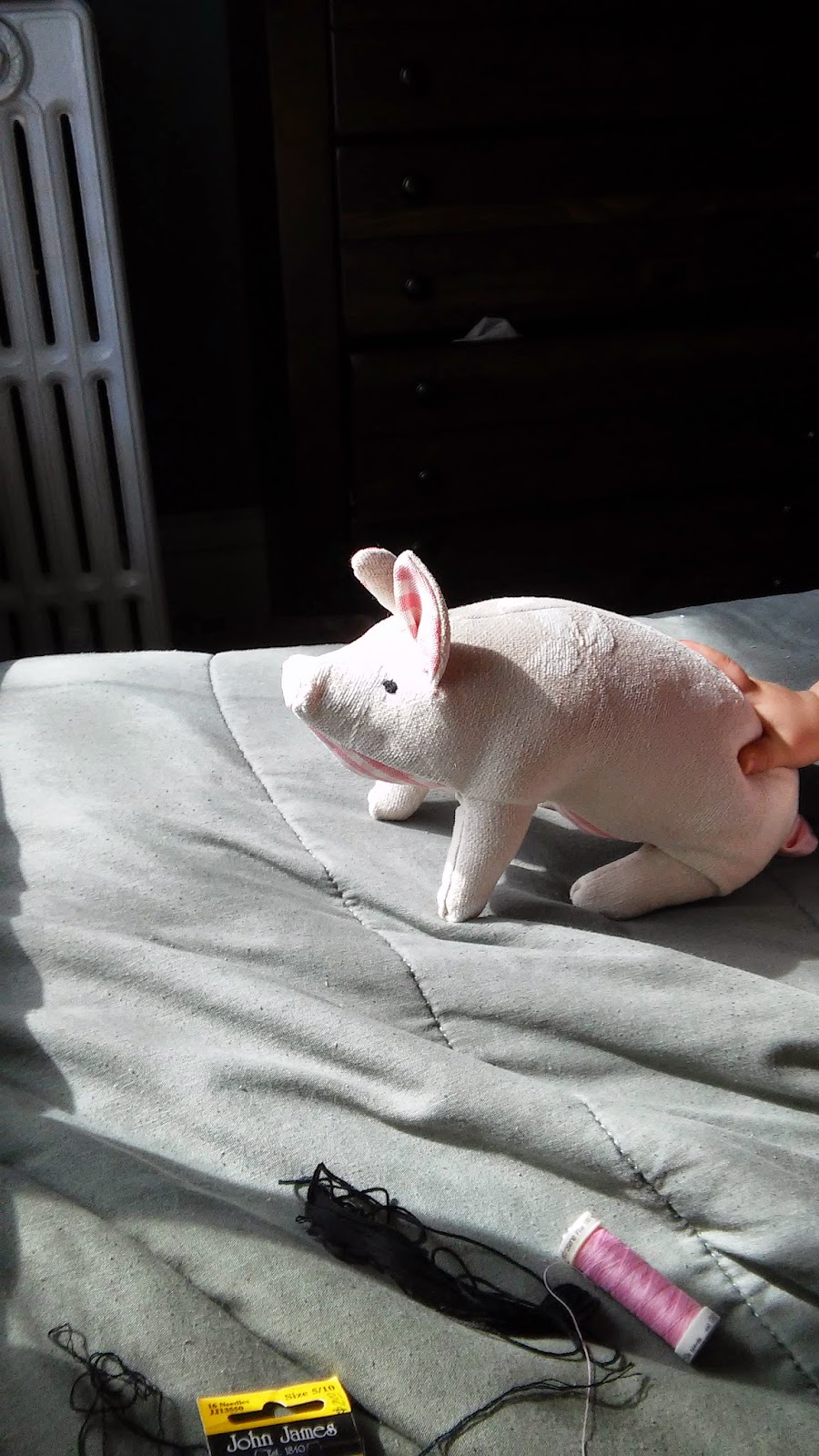 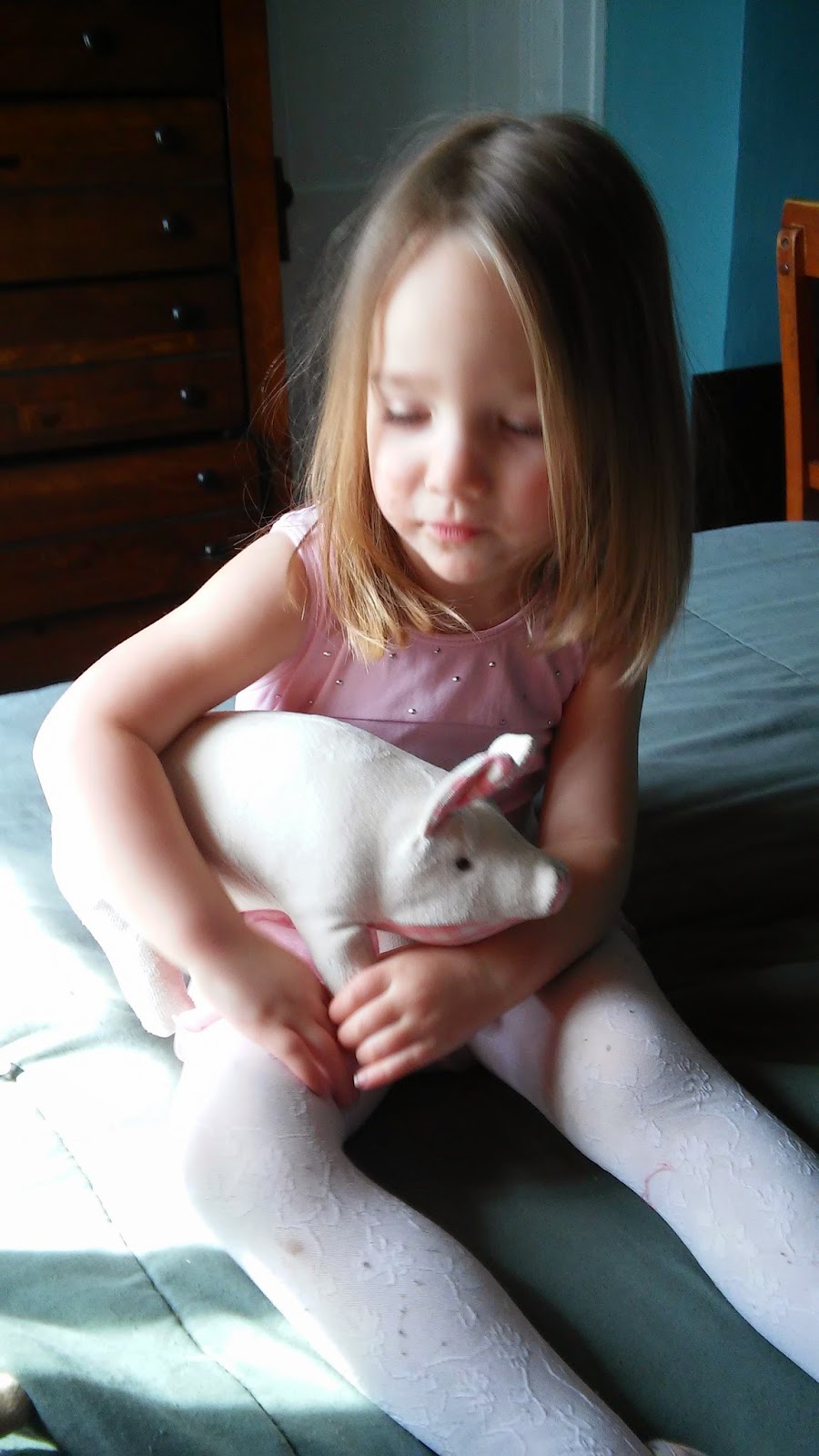 She caught me in the act of sewing on the eyes, so it wasn't a surprise, but I think she likes him.
Joining Nicole at Frontier Dreams for KCCO.