Yesterday I had a creative impulse that would not be ignored.
Despite having 3 active projects for 3 different work environments, I just could not help but go forward with this frivolous project for my couch.
About 3 months ago I found a large wool remnant in our bin at Treadle Yard Goods, and though I had ambitions of making a coat for the Elder, the idea soon came to me that it would be the perfect throw for our couch.
Fortunately, or unfortunately, it's still pretty chilly in the evenings, so we've been using this throw blanket every day when we watch our Top Gear re-runs together.
There has been a small pile of felt sitting on the side table for almost as long as we've had the throw, waiting to be an embellishment of some sort.
I had an idea of flowers and leaves, but I finally, just yesterday, settled on circles. 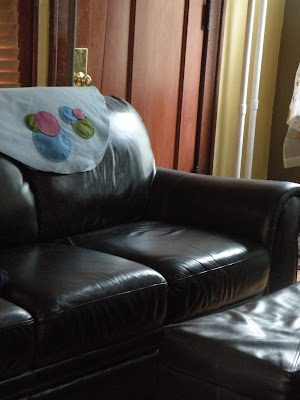 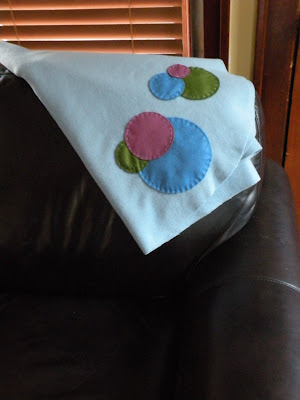 I took some bowls and glasses from the cupboard and traced them on the felt, then I attached them to the blanket with a running stitch. I also rounded out the edges of the fabric, which were looking a little rough.
Nothing Earth-shattering, just a fun bit of fun.
This may seem like procrastinating, which I suppose it is, but I have decided that time spent creating can never be wasted time.
Posted by Jess at 7:13 AM