I don't know what it is about Summer that makes me feel like baking.
Maybe it's already so hot, that having the oven on doesn't really matter.
Anyway, I had some friends ask if I would share the recipe for the deep dishes from yesterday so here it is.

(I have said it before, you have got to get this cookbook! Every recipe I have used has been perfect.)

1. Cover the potato with water in a small saucepan and simmer until the potato is cooked through, 10-15 minutes. Drain, and when it's cool enough to handle, run the potato through a food mill or ricer. Measure off 1 1/3 cups lightly packed potato and put to the side.
2. Mix together1/2 cup flour, 1/2 cup water and yeast. Let it proof for about 10 minutes and add flour, salt, 2 tablespoons of olive oil, remaining water, then the potato.
Mix with a dough hook for a minute or so and then let the dough rest before kneading on a floured surface for 5 minutes.
3. Online, they suggested letting the dough rise in the oven using this method.
Heat the oven to 200 degrees, let heat for 10 minutes then turn off the oven.
Place the kneaded dough in an oiled bowl and cover with plastic wrap. Proof the dough in the oven (which is now turned off) until doubled in size (45 minutes to and hour)
4. Preheat the oven to 500 degrees.
5. I used cake pans, so the next step is to divide the dough in half.
Oil the two pans using 2 tablespoons of olive oil per pan.
It seems like a lot, but it works well to make a nice crispy crust.
6. Press the dough into the prepared pans, and push up the sides of the dough to the top of the pan.
7. Here I missed the next direction which is to par bake the crust: generously prick the dough with a fork reduce the oven to 425 and bake on a preheated pizza stone until dry and lightly browned, about 15 minutes. Then top the par baked crust and bake another 10-15 minutes.

What I did was top the raw dough with my sauce and "cheese" (I have to use the vegan stuff, yuck.) and baked the whole thing at 500 for 20-22 minutes.

When it came out I shook some dried basil on the top, since the vegan cheese has no flavor, and then we let it cool and the kids devoured it.

I will definitely use this recipe again, in fact the dough was so light and fluffy that I think it would be a great bread.
That's on my agenda for today, and I think I'll add some caramelized onions to the dough with a little fresh thyme.

Maybe I'll post some photos of that bread, if it works out.

Update: I made another batch of the dough, added a cup of caramelized onions with some rosemary and baked it in a dutch oven like the NY Times No Knead Recipe. 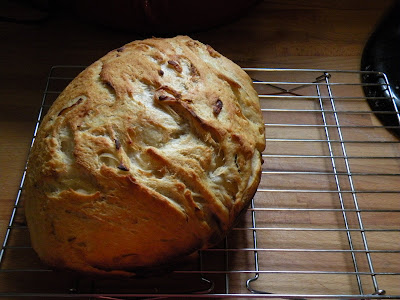