This week turned out to be full of fun and excitement.
Thursday the Hug-a-Bugs and myself went to an awesome fire-fighter-themed birthday party.
My friend went all out.
There was a fire-fighter trainee obstacle course around the backyard, everyone got a hat and a badge, and then we toured an actual fire station! 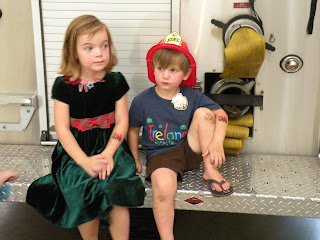 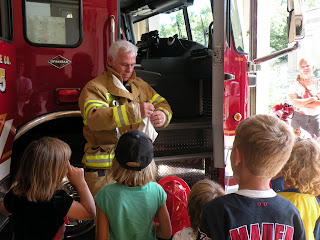 It's a good thing that fire fighters are used to the heat, because it was about 95 degrees in that station and he is about to put on a wool hood. 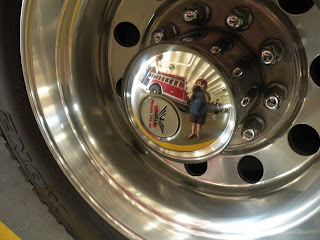 The Younger Hug-a-Bug asked to use the camera, and if you enlarge this you can see that he got himself, the firetruck and the Elder Hug-a-Bug reflected in the hub cap. He's clearly a genius.

Then yesterday we spent the day at the Minnesota State Fair.
It was a beautiful day. 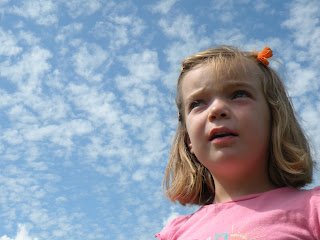 We spent most of our time at the Kidway, I think we went on at least 10 rides between the three of us (the Younger Hug-a-Bug isn't quite to the line for many of the rides, so I got to go along). 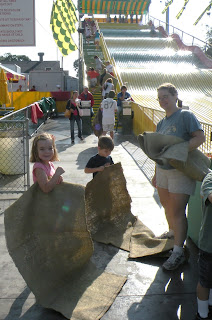 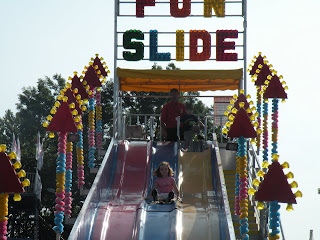 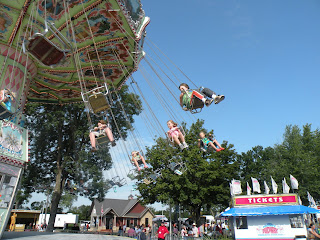 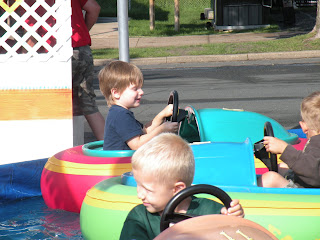 I made the ill-advised decision to ride the Tilt-a-Whirl, and my stomach wasn't quite the same for the remainder of the day.

There were mini-donuts (which were eaten too quickly to be photographed) and fresh-squeezed lemonade.

There was Irish dancing, and a band who played an instrumental cover of Bohemian Rhapsody.

In the arcade I saw a whole row of photo-booths. 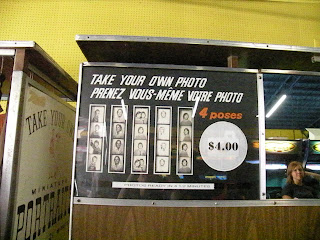 So we took some family portraits. 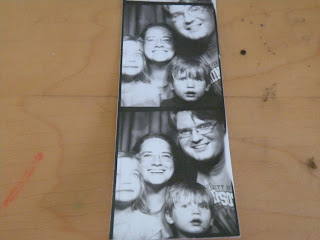 The best part of the whole day was that the Elder Hug-a-Bug won a prize in the midway.
She won the game where you fill up a balloon with water until it pops.
I can tell you, she was over the moon.
The camera was nearly out of batteries by the end of the day (why I didn't recharge in anticipation of the fair, I don't know) so I didn't get a shot of her with her major award, but she was almost in shock.
Even with the sleepy-boy tantrum on the way to the car it was a terrific day and I can't wait for next year.
Posted by Jess at 7:49 AM