I don't think we could have crammed more into this weekend, good and bad.
Saturday the Elder and the Younger had 2 birthday parties (they attended one each), swimming lessons and a dance recital (I had hoped to share some photos, but they didn't come out, it was dark in there), and I started teaching a new knitting class.
The class was extra fun for me as my friend June was there with her daughter, and also one of the other students turns out to live very close to me and has kids of a similar age.
That morning started off, unfortunately, with the discovery that someone had opened our garage and stolen our bikes with the help of a bolt cutter.
Yesterday began with the first trip to church as a family since the Youngest was born.
It went pretty well. The Youngest slept most of the time, and was adored by all of the folks who had seen me lumbering around vastly pregnant these past few months.
The one moment of the morning that bummed me out was that I was snubbed by the mother of one of my choir students. A few months ago she had some pointed criticisms of my teaching style, and we did our best to apologize for the things she didn't like, and made some modifications to address her concerns.
It turns out that she had a son the day after the Youngest was born, and I saw them in the sanctuary and greeted my student and pointed out the new baby to the Younger. The mom grunted a greeting, but just swept past us as quickly as she could. It left a sour taste in my mouth.
In the afternoon the kids had another performance of their recital, which I was unable to attend as I was singing a concert with these fine folks. 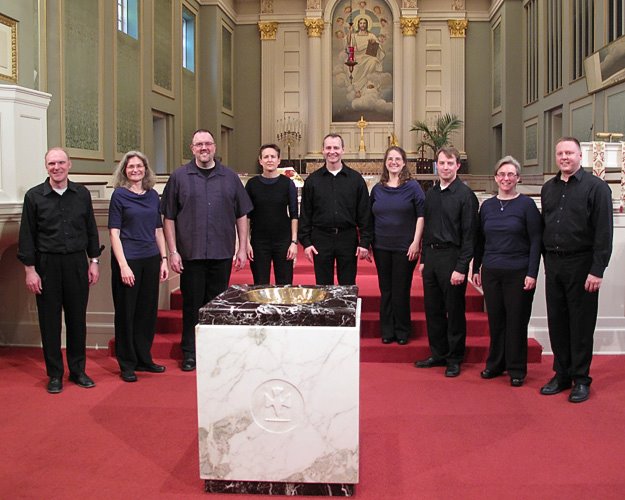 I was sad to miss the dancing, but we sang a good concert, with a great audience and we raised over $2300 for a program called Project Home which is an overflow homeless shelter that rotates locations throughout Saint Paul at different churches.
Caritas has a concert next Sunday in Apple Valley, for you local folks, and we're singing for another wonderful local non-profit group - Southside Family Nurturing Center.
Come and join us, if you're in the area!
I'm looking forward to the rest of the week which is looking much calmer and less full of commitments.
As a bonus, the weather is perfect. Maybe I can even try some gardening...
Enjoy your Monday!
Posted by Jess at 10:31 AM