Honing My Spinning Skills (the one with all the parentheticals)

Since I made the commitment to the Shave 'Em 2 Save 'Em challenge, I have been researching spinning techniques, and trying out new things. It's been a lot of YouTube and podcasts: Becks at Tiny Fibre Studio, the Two Ewes Podcast with Kelly and Marsha are a couple of my go-tos, but if it's spinning related I'll pop it on just for the info and the visuals (in the case of videos).
The other day I watched a video Becks made about making striping yarn, (link above) and I thought I would try out her technique.
I happened to have an old pack of needle felting roving in natural shades from Fiber Trends. 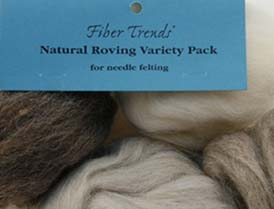 I knew I wanted to try chain plying, so I spun all the fiber straight through onto one bobbin.
I wish I had taken more photos, but it was late at night (darn you Grantchester, and the hunkiest, broodiest, ginger vicar around [I'm behind a season or two]), and I had a margarita so my photos (and, as it turns out, my plying) were not super hot (definitely not as hot as Sidney Chambers). 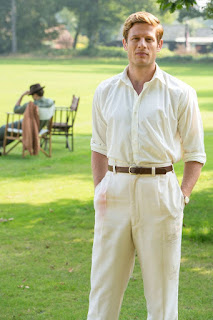 When you chain ply, you're basically making a long crochet chain, which you're also spinning. It's a bit of a tricky situation after tequila, but I had tried it in a smaller sample a couple of weeks ago and it was really slick. 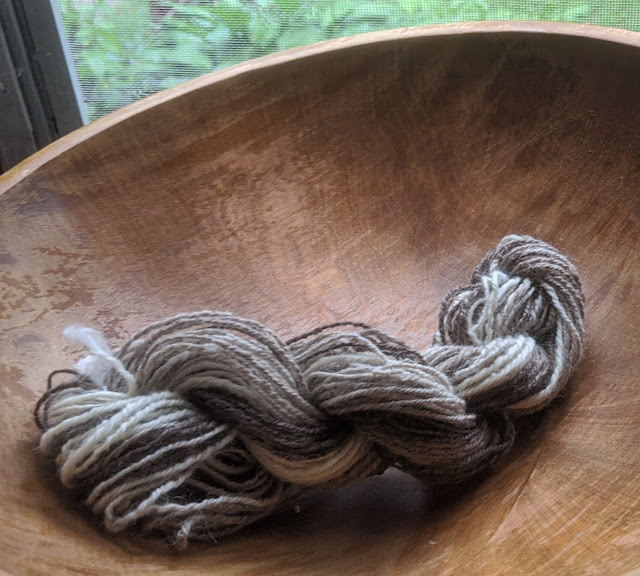 Here we have the yarn in its hank 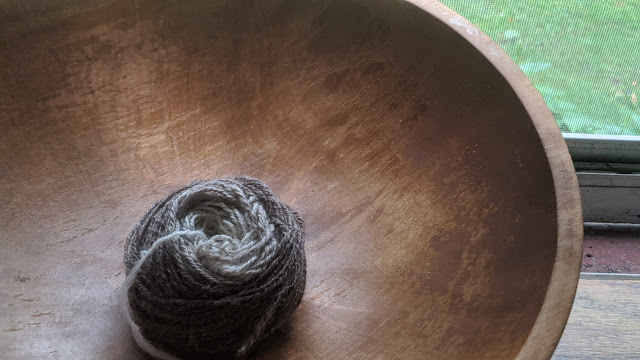 and in its ball. It didn't end up to be very much yardage, I think it was about 2 ounces total.
Since the roving was intended for needle felting it was not very soft. I decided that what I needed was a little basket.
I started with a flat circle on the bottom, and once it got to the size I wanted I stopped increasing and went straight up.
By the time I reached the bright white I started decreasing every 5 stitches or so to slightly pull in the top.
I had a little bit of yarn left, so I added a little handle, which made the basket perfect to use as a yarn bowl.
The majority of the stitching is half-double crochet, and the very last row was single crochet because I was running out of yarn.
I began my fiber life as a crocheter, and I always forget how easy it is to improvise. 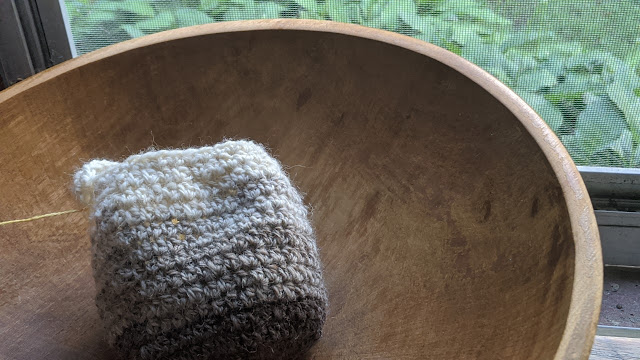 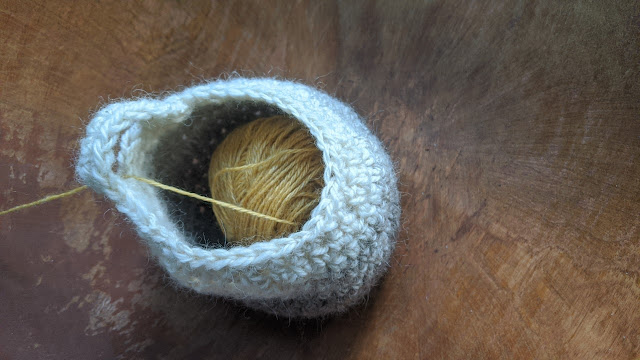 This project was quick and easy, and I think it will be pretty useful. I may even make up a little yarn bowl for every project I'm working on (that's quite the list, I have a problem with starting projects and then starting more projects, monogamy is not for me, fiber-wise)
What's on your needles (or hooks) lately?
Posted by Jess at 7:54 AM