I learned to spin about 4 years ago, but I'm very much still a novice.
I don't have a lot of fancy equipment or accessories.
For the last couple of years, my set up has been this lovely wheel 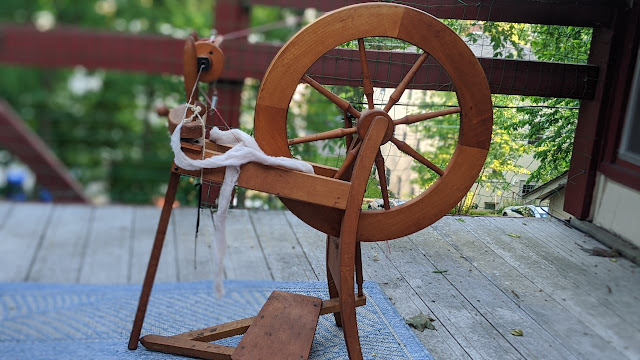 and an improvised lazy Kate for plying. 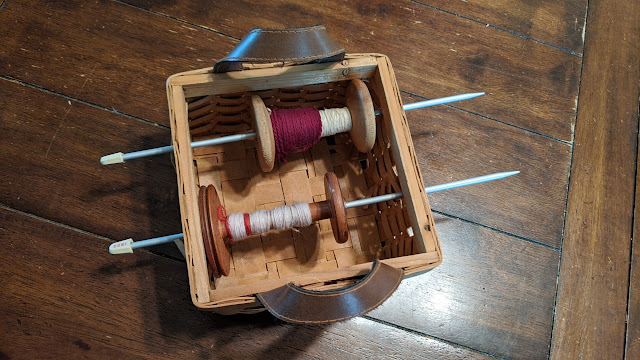 This morning I got a bee in my bonnet to upgrade the Lazy Kate, so I went hunting in my wood pile and got to it.
I used a couple of scraps of plywood for the sides, and a bit of a 1x6 for the base.
First, I knocked off the corners with my mitre saw, then I marked out my holes, and drilled through both pieces of plywood. If I had it to do again, I would drill one and then mark and drill the other, because one hole is pretty wonky.
I popped over to my parents' house to do a little finishing work with their table saw, and then I was ready for assembly. 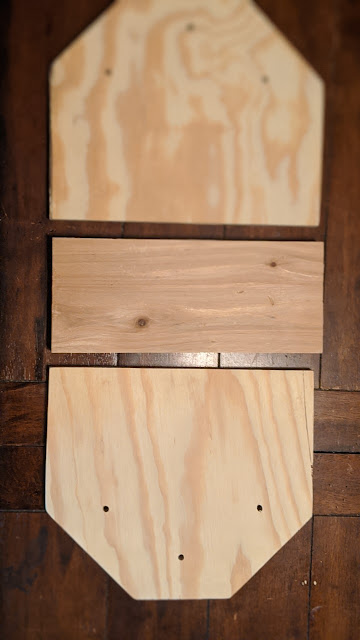 Some glue and a few nails later, I had my frame. 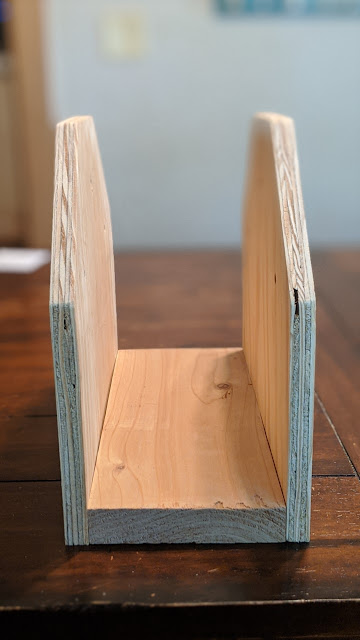 I used 9 inch size 7 straight needles that I had in my stash to act as posts. 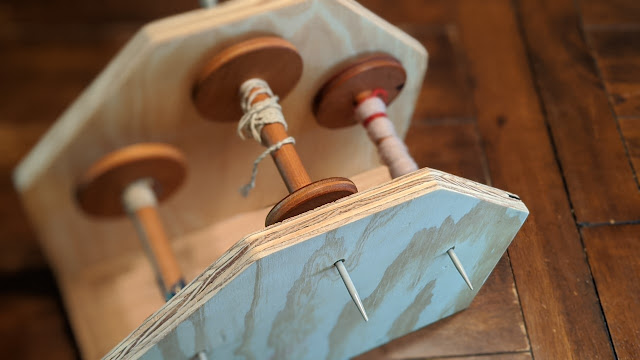 As a stop for the needles, I cut some small leather tabs and folded them. The first ones were too loose, so I cut new ones and made a slightly smaller hole with my super punch. 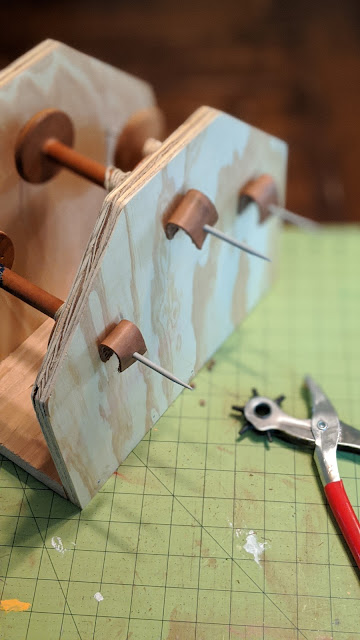 Since there was a little space beneath the bobbins in my new set up, I hoped that I could slide in a little box or basket to hold a pair of scissors, my wheel oil (when I find it, my space is a little wild at the moment), a pencil, and some paper to label the hanks of yarn as I finish them.
The space was too narrow for a cigar box, and I didn't have a basket the right size, so I built myself a  caddy from leather.
The only piece I had that was big enough had a flaw, 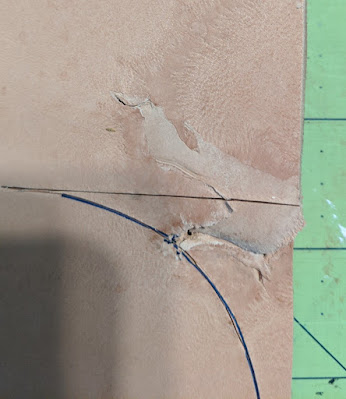 but I found some inspiration online, and cut around the broken part to make a rounded edge caddy. 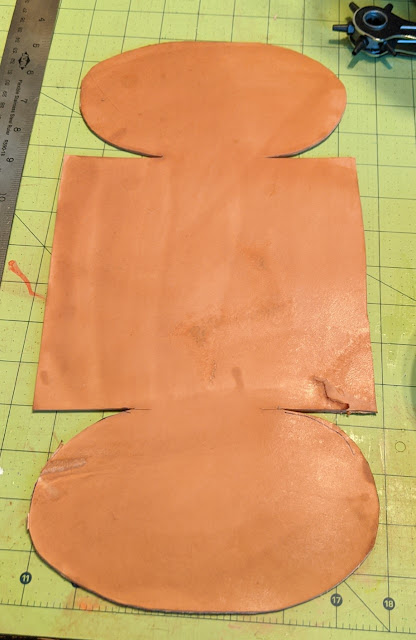 I folded the straight sides up, folded the rounded sides around, punched holes, and sewed them together. This project was super quick, and ended up pretty cool. 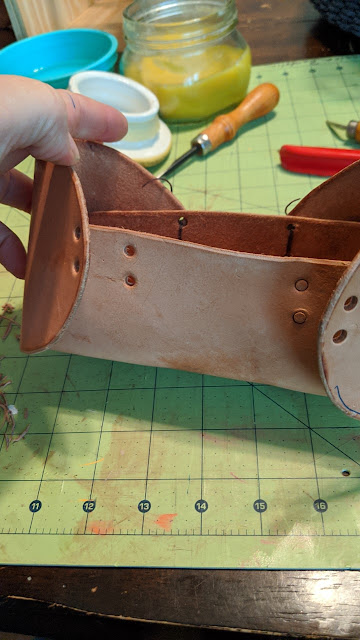 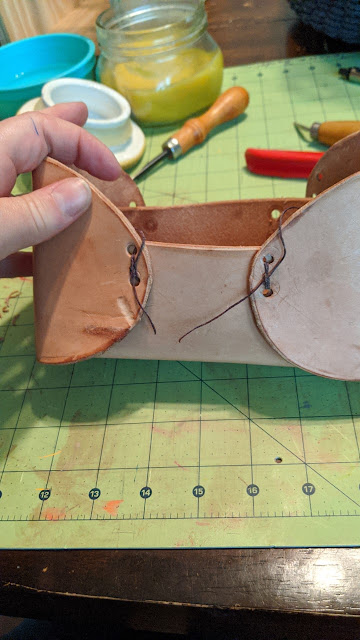 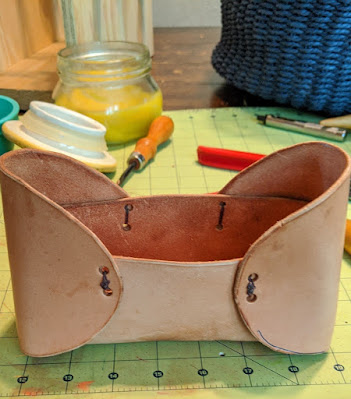 For winging it, I'm pretty pleased. It just fits a little notebook, a pencil and a small pair of scissors.
Next, I'm going to cut out some heavier paper labels to store in here too, along with some scrap yarn. 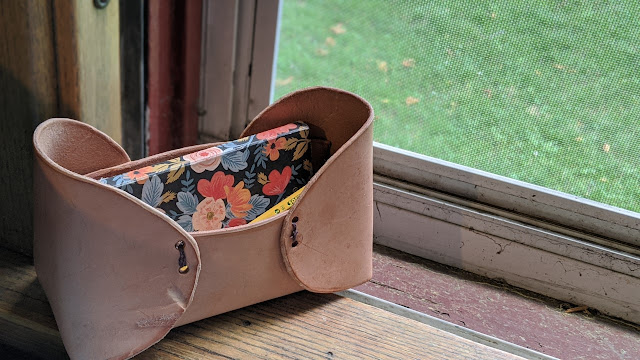 The best part is that it slides right into the Lazy Kate, without bumping into the bobbins. 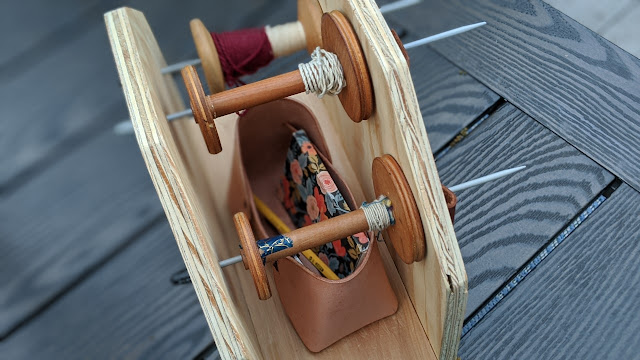 You can find Fifth Lamp Down Studio on Facebook
Show me what you're making!
Posted by Jess at 9:11 PM