I spent three hours on Saturday and three hours on Sunday at the Irish Fair talking about the history of Aran sweaters.
It was lots of fun, and I got to chat with many interested and interesting people
My dad got this one with me mid-gesticulation. 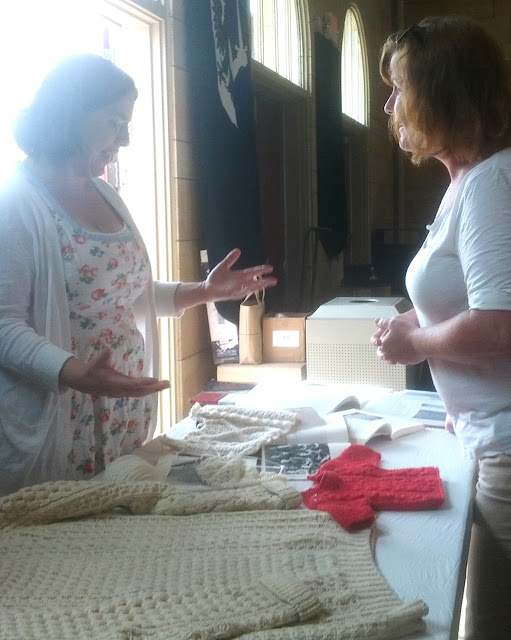 The big sweater is an Aran original, and the small red one I made for a class I was teaching about baby knits and later The Youngest wore it.
There aren't many fashion statements that have endured (in a non-steam-punk way) since the 1800s, but the Aran Jumper is one.
I think this is mostly due to the (probably made-up) folklore associated with the patterns.
Even if the rope cable isn't meant to indicate that a sailor would have good luck on their voyage, or the diamonds didn't bode for a hearty catch of fish, the stitches have been passed down for more an a couple of generations since then, and they have come to take on those meanings.
It all comes down to some ingenious marketing, and the sweater-making industry has served Ireland, and the Aran Islands in particular, quite well.

During my prep for this presentation I started a swatch to show some different stitches and I realized that if I continued knitting it, it would fit The Youngest as a sweater.
So, while I chatted about the knitting I was able to finish up the front and make a good start on the back.

Anything on your needles lately?
Posted by Jess at 11:11 AM